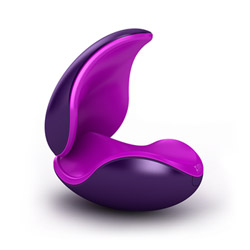 Comparison of the Zini Deux and a Baleen Whale

The Deux has won awards for its design and it is a clever toy, but it is only useful as a foreplay toy (its intended use). Its vibrations just aren't strong enough to bring you all the way there. For those who are happy with weaker vibrations or just want something to spice up a blow job and provide a little warm up, this could be just the right toy.
Pros:
beautiful, exceptional design, has his and hers components, luxurious packaging
Cons:
too weak, temperamental controls, high cost, tip on female part is too hard and pointy
Rating by reviewer:
4
extremely useful review 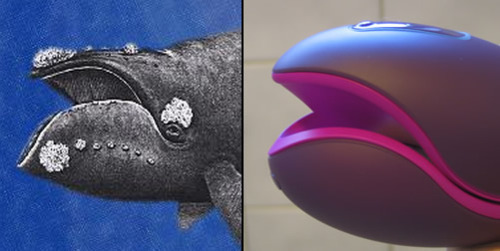 Ways the Zini Deux is like a Baleen whale:

Ways the Zini Deux is not like a Baleen whale:

--Only one is waterproof
--Only one fits in your bed

The exterior is made of hard plastic and has a smooth feel. The inside part that is meant to contact your body feels especially smooth and silky/velvety. The less pointy end of each half is designed to fit nicely in your hand and be easy to hold.

We were both mesmerized by the uniqueness and coolness of the magnets and how each part fits so perfectly into the other half. We spent some time just opening and closing it. Its design definitely adds an element of fun.

The Deux arrives locked and uncharged. Only one charger is included so you must charge one half at a time unless you have another Zini or Lelo rechargeable product. The chargers for both manufacturers are the same. As you charge the Deux, the light that surrounds the control buttons changes from red to green.

The instructions state that it takes two hours to charge. Both halves of mine took a bit less time than that. It appears to hold a charge well. We've used both halves multiple times and its still on its first charge.

Its moderately noisy in use. You will definitely need to have music playing to mask its sound.

The plus button is raised. The minus button is indented. The center patterns button is flat with its circle symbol engraved. The differences are to make this product usable for visually impaired people. As is true for everything, steps taken to make something accessible benefit those without disabilities too. You can easily distinguish the buttons just by feel.

Once the initial charge is complete, you will need to unlock it. Good luck with that. The instructions say to press the minus button, then press both the plus and minus buttons to unlock it. I swear I'm not retarded but it took multiple tries to successfully unlock it. Its possible that my Deux is somewhat malfunctioning. You can re-lock it with the same sequence of actions if you dare.

Sometimes, but not every time, it was difficult to change it in or out of pattern vibration mode. This sometimes required numerous presses. Other times, one normal press was enough. The same is true of attempts to turn it off. Both my husband and I experienced our halves slipping into a temperamental mode where we thought we would have to let them run themselves out in order to turn them off. Eventually we were able to turn them off, but clearly this is not normal and is incredibly annoying.

Disclaimer: Mine arrived on a scorching hot day. After sitting in a mailbox all day, my Deux was alarmingly warm when I first removed it from the box. I felt it prudent to let it cool down before I began charging it. Its possible that the Deux doesn't tolerate traveling in hot climates well.

We were as dazzled by the packaging as we were with the Deux's design. It comes in a beautiful, luxurious box that swings open sideways to reveal the charger and storage bag in a compartment under the upper section where the Deux rests inside a clear plastic holder. Also included is an instruction booklet and color fold-out use guide.

The instructions recommend using only water based lube with this toy. The charging port is the one non-waterproof part of the Deux.
Experience
Female part

I tried the female part multiple times. First I pressed the area that is to one side of the pointy part to my clitoris. Results were not notable. Then I tried moving the point back and forth across my clitoris. This seems to be the only way the Deux comes close to being a good experience for me. But the tip is just a bit too pointy and hard for comfort and the vibrations aren't close to being strong enough for me. However, it is a foreplay toy, so maybe that doesn't matter. Its only meant to be something fun to warm you up.

I will say that when the pointy tip is in the vicinity of your clitoris, the area just next to it (closer to the center) nestles perfectly against my mound.

Both parts can be used on the breasts too. I already know that I dislike any breast stimulation so I didn't try it that way.

My husband gave the male part several tries too. Since the literature says to use it on your testicles, that's where he kept it during his first go. He didn't find it to be that stimulating, but he did reach orgasm faster. He reports that men's testicles aren't that sensitive. At least his aren't. So the next several times he used it on the shaft of his penis. He didn't find that to be much of an improvement over using it on his testicles. He also was bothered by the Deux's vibrations numbing his hand.

If you're careful, there is enough room to use another toy inside you or for your partner to be inside you from behind when the female part is in use. I don't believe its possible to use the male part during penetrative sex, although it could be a good addition to a blow job.

For this price, I expect a toy to dazzle me and have strong vibrations. While it's design is dazzling (the Deux won three international design awards), the vibrations just aren't close to being strong enough for me. The Deux is weaker than the Seed and than MiMi.

I would give it five stars for its clever design and beautiful packaging, but only two or three stars for its performance. Overall I'm giving the Deux four stars.
This product was provided free of charge to the reviewer. This review is in compliance with the FTC guidelines.