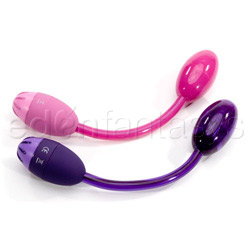 Other Flex a pleasure reviews

Cool Idea...But Weak Where It Counts

Nice look and feel...until you turn it on. This toy has a lot of potential and could be awesome with a stronger vibration. Unfortunately the less common batteries, weak vibration and less than stellar quality made it a waste of time and money for me.
Pros
looks pretty, flexible neck, affordable
Cons
weak vibration, first one broke right out of the box
Rating by reviewer:
2
useful review
I was really excited about the size, shape, and design of the Doc Johnson Flex a Pleasure Egg. Unfortunately it lived up to none of my expectations.

Firstly, I did not purchase this toy on EF, so I'm going to write the review I wish I could have read before buying it instead of the manufacturer description I got on the other site.

When I first took it out of the box, I actually really liked the initial textures of the toy. The egg end is smooth and the controller end has a soft plastic feel. I do like the colors too. The pink and purple are both very feminine and girly which i tend to like in a toy.

But beyond that, the disappointments just kept coming. Firstly, this toy uses N batteries. I don't know about you, but i don't have any of those just lying around. Mine came with a set of two batteries thankfully so i popped them in and went to turn the toy on.

The flex a pleasure is controlled with a twist nob on the end...as I began to twist slowly so as to feel each level of vibration, the nob broke off the end. I exerted almost no force at all and the end just broke off! I e-mailed customer service and they sent me a new one, no questions asked which was actually pretty cool.

So, a week later I started over, this time being even more careful in case the nob tried to randomly detach itself again. Smooth sailing with this one. So I eagerly turned it all the way up...to a not very stimulating, mild vibration. In fairness, I would generally consider myself to be a 4-5 bee kinda girl. To me this toy feels like a 3 on the highest setting and only for the first few minutes it's on.

So I do like the shape and the design. I thin the bendy neck is a brilliant idea and if it was strong enough, I would absolutely love this toy for both clit and g-spot stimulation. Unoftunately it totally let me down in the power department.

There was no off-putting smell when it came out of the box and it's fairly easy to clean. It's relatively quiet and the flexible neck makes it pretty easy to fold up and hide away or pack for a trip.

It is definitely affordable. I'd say it's probably an ok toy for a beginner who is timid about toys that look too much like the real thing and for those who don't like a strong vibration.

**Follow Up Info:
Eden does carry N batteries which is part of what makes Eden so awesome. Unfortunately, in general they are not that easy to come by. Battery stores have them, probably some hardware stores but you won't find them in your usual battery sections. I hadn't found Eden yet when I bought this toy. The batteries are something I could get over if I had liked the toy more.

As for cleaning and storage, I use toy cleaning wipes that allow you to clean the surface without getting moisture in the battery compartment. It is supposedly water proof but I have trust issues with this toy. For storage, well I'm crafty so i make individual bags for each of my toys, I have this one in Lycra fabric because the jelly picks up fewer fibers from lycra.
This content is the opinion of the submitting contributor and is not endorsed by EdenFantasys.com

Become a Reviewer
My Flex a pleasure tags
About author