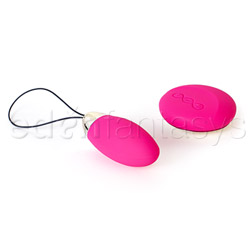 I have enjoyed the Lyla. It is a bit pricier than some other brands, but I would buy another Lelo brand product because of the quality of this product. My husband and I have enjoyed this product as a fun foreplay item that can be used during sex as well. If you are looking for a high quality vibrator with remote then this is definitely worth every penny. This looks and feels very sensual right out of the box. Spend a few moments becoming familiar with the remote and you will be good to go.
Pros
-Extremely sooth and silky material.
-Great size and intensity.
Cons
-Bit more pricey than some other brands- but worth it.
Rating by reviewer:
5
useful review

I like all the Lelo brand toys, due to the material they are constructed of. The material does not have a chemical or plastic type smell. The Lyla is smooth and silky. It easily glides over skin with no grab or drag that some cheaper plastic or other silicone toys have. A light lubricant may be used if any is needed at all. I ordered the hot pink and it is actually pretty.

I found the size and shape of the Lyla to be perfect. The control is a bit large, but still fits into the pocket of my husband's khaki pants, but might be noticeable in the pocket of a pair of jeans.

Lyla has a generous loop on the end so retrieval is simple. The loop is a nice synthetic type chord that is easy to clean. It is thin enough so that it is not distracting.

The vibrations from the Lyla are more than noticeable, but not too strong. I do not like anything too extreme, so I found this perfect. You cannot hear the vibrations once inserted.

I wash my toys with warm water and antibacterial soap. Lyla is easy to clean because it is so smooth. The cord is thin and you can easily dry it with a hand towel. The Lyla is waterproof, but I have never tried it in the shower or tub. The charger cover seems to fit securely, so I don't foresee any problems with using it that way.

The Lyla packaging is simply beautiful. It reminded me of packaging that comes from Nieman Marcus when you have purchased a nice perfume. Even though it had been shipped UPS, the package held up and held all the components in place so that they did not shift during shipment. Lyla's box is black/gray and very sleek looking. The Lyla feels and operates like a luxury sex toy and the package is your first indication of what to expect. The packaging would make a great gift presentation, and you could store it in the box if you so desired.

The book is very tastefully done and is invaluable. Be sure not to discard this!

One of my favorite features is the remote. My husband and I both enjoy the ability to discretely play.

I couldn't wait for this to arrive. Although we looked at it on several occasions, we did wait until there was a sale. I did have to charge it for a bit, but by the time my husband arrived home, it was ready to go. We were like two teenagers laughing about how silly we felt trying to work this. Once we were "down to business," we had an enjoyable time. We first used it for clitoral stimulation, and then my husband inserted it. Because my husband and the Lyla worked well together there was no need for lube. When the lyla was removed to make way for my husband, we used it again for clitoral stimulation.

The Lelo brand was recommended to us by the sales girl at the Liberator store in Atlanta. She said they by far had the best feel and durability. She allowed us to touch the product so I had felt the smoothness before I purchased it.
This content is the opinion of the submitting contributor and is not endorsed by EdenFantasys.com