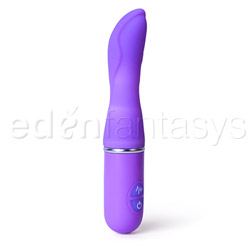 This silicone vibe produces a great range of escalating and pulsating and steady vibes, ten in total. You can recharge the removable battery with the included charger.
Pros:
Silicone, lots of patterns to satisfy everyone
Cons:
rechargeable via a strange battery and external charger.
Rating by reviewer:
4
extremely useful review

This vibe is covered in body-safe and easy to sterilize silicone. It is rechargeable, but in an idiosyncratic way: it comes with an unusual battery size and a charger for this removable battery. It offers a range of 10 vibration patters.

I like the pointy bulbous shape at the end, which reminds me of a tulip. It feels good upon insertion and then fills you up right near the Gspot if you insert and withdraw it at an angle. The silicone is velvety soft and odorless.

It is definitely suitable for travel as long as you remember to pack the battery charger. It would have been even more travel-friendly if it had come with a pouch to hold the vibe and the charger.

It claims to run for 45 minutes on high and for one hour on low, which seems pretty near the mark. Although I think most of the settings count as high.

A two-sided button turns it on/off and cycles through the ten vibe strengths and pulsating, escalating patterns. I really love the pulsating patterns in particular, as they produce intense throbbing sensations that are especially interesting when it's inserted. Overall, there are a lot of patterns to choose from, each pretty unique. So there's something to satisfy everyone. The vibes are not Hitachi Wand level, but they're pretty strong for a small vibe and you can't beat the versatility. It's also pretty quiet, like a cell phone.

The packaging claims it has a "memory chip" but after carefully studying the packaging and using it twice, I have been unable to determine whether this memory chip actually does anything. I wondered if it was one of those vibes that learned what you liked; but that appears to not be the case. It's not a good idea to advertise a feature without explaining it. (After doing some research, it appears on the Cal Exotics website that the memory chip allows you to return to the last-used setting. Not a very significant function, in my opinion.)

You can sterilize the silicone shaft, but not the plastic handle with a 10% bleach solution followed by a soap and water rinse. You can't boil it because it has electronic parts attached. It's best to store it long term without the battery in.

Discardable, no bag to keep.

Although this is nominally rechargeable, and that makes it better than a battery-operated, it's not as easy to charge as a toy with a charging base. Although, I guess, you could replace the battery (it's weird, but I'm sure you can buy online) when it loses functionality, which you can't do with a plug in toy or one with a base.
This product was provided free of charge to the reviewer. This review is in compliance with the FTC guidelines.