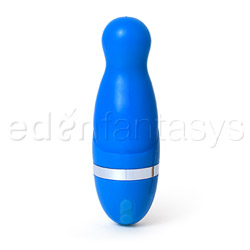 The Craze Cutie really is cute! It comes in three vibrant colors and has a light show to boot! There are 7 strong vibration patterns to choose from. As long as you can stand a good amount of power, the Craze Cutie can have you going crazy for more.
Pros:
Light is cool, Good TPR quality, Strong, Pulsation modes, Cute!
Cons:
LOUD, Too buzzy on highest, Can't be inserted far (for some), Joining of the TPR and plastic
Rating by reviewer:
4
extremely useful review

I feel like throwing a rave and listening to Electrohead (one of my favorite songs by one of my favorite bands) when I play with this vibrator! It's got killer vibrations and a light show to go with it. The Craze Cutie is totally a toy I thought wouldn't wow me, but I was wrong. It's a ton of fun to use and gets me off every time. It has 7 functions of vibration to choose from and is made of a really nice TPR that feels like silicone to me. It only takes two AAA batteries and has plenty more power than I'd expect from that type of battery source. It's easy to use solo male or female and can be used my couples. The noise level is a little loud, but the Craze Cutie is waterproof, so you can drown out the noise that way!

This toy comes in three different colors: bright blue, orange, and purple. I chose the blue since I have plenty of toys in purple and don't really like the color orange.

The Craze Cutie is made of two materials. The first is TPR. It such a great TPR that I honestly thought it was silicone at first! It had a very slight smell first thing out of the box, but now months later, it has faded to no smell at all. TPR is a 7 on Eden's Material Safety Scale. It is not completely non-porous so keep in mind that it cannot be sterilized and the smartest thing to do when sharing is to use a condom. This TPR isn't sticky but it does still have drag and picks up some lint. Always rinse it before use and consider using lubrication to cut down on irritation. It is firm, smooth, and still flexible. The material is opaque so the light can shine through it when it's on.

The second material is ABS plastic. This is rated higher on the safety scale, but it isn't the portion that gets inserted, so that's moot. It also has no smell or taste and is smooth.

The design of the Craze Cutie sort of reminds me of a bowling pin or those Matrioshka toys. 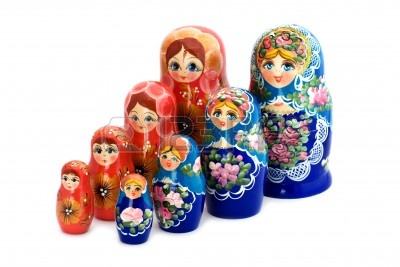 It's best suited for clitoral pleasure, but it can be inserted shallowly. It is 5 1/2" in total length. About 3" or so of that is insertable, but I have a hard time inserting much more than 2 inches. Again, I prefer this for clitoral pleasure for a reason! The top bulb is 1 1/4" in diameter, 4" in circumference. The smallest diameter is right below the bulb. It's 1" there. Because of this and the larger size afterward, it is safe to pop in anally. Don't go past this point, though, there isn't a second stopping point. The toy quickly reaches a max diameter of 1 3/4". This is a pretty massive 5 1/2" in circumference. A toy of that size usually isn't hard to insert, it's the drastic change in size that happens so quickly that makes it feel larger and a bit more difficult to insert. 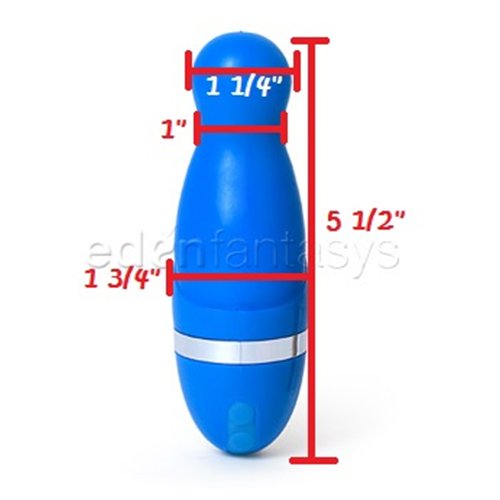 This toy isn't the most obvious thing in the world, but it isn't the most discreet either. It's suitable for travel because it's compact and not oddly shaped or long.

Craze Cutie has 7 different functions/levels of vibration, pulsation, and escalation. This corresponds with light indicators. The toy is fairly easy to use. There are only two buttons, but I tend to mix them up and turn the toy off randomly! The power button has the typical power sign on it which is raised. It is a little smaller than the other button and the power symbol is more raised. That's a way to distinguish it from the mode button. If you press the power button, it doesn't start any vibration, but it does turn on two lights. One of the lights is in the bulb at the top and the other lies below the control buttons. So fun!

Then you press the button that has 7X on it. Pressing it once starts the first function.level.
1. The first is a steady level of vibration. I consider the first level to be above average. I didn't expect that from a toy that takes two AAA batteries. The vibrations are concentrated in the bulb but travel down a bit. The noise level is high, though. I wouldn't even use this across my apartment if I were trying to not wake someone up.

3. The third level is the same as the second but faster.

4. The fourth feels a little stronger. The pulses are longer and more intense. There is also greater pause between the pulses.

5. This level is sort of strange because it's the same as 1 but a little stronger. The vibrations travel further and it's even louder. I would have expected this to be the second one.

6. This one is a flutter and then a long pulse on the same level as the 5th.

7. This one is the fast pulse from before but on a higher intensity.

The vibrations are buzzy for all the levels, but it gets worse on the high levels. Those are a bit too much to use on my clit directly, but feel great internally.

TPR can be used with silicone or water based lubricant. I didn't need a whole lot no matter how I used it. To clean, it can be run under warm water and washed with anti-bacterial soap. The material doesn't really retain smells, so you don't have that to worry about. Let it dry, remove the batteries, and place it back in the package or in a cool and dry place not touching other TPR or lower material. They can melt together or deform each other irreversibly.

The packaging is pretty simple. It's a clear plastic box slightly larger than the toy. There is a clear tray that the toy fits into and then slides into the box. It has confetti on it and minimal information. It would make a cute gift for a bachelorette or 21st birthday. 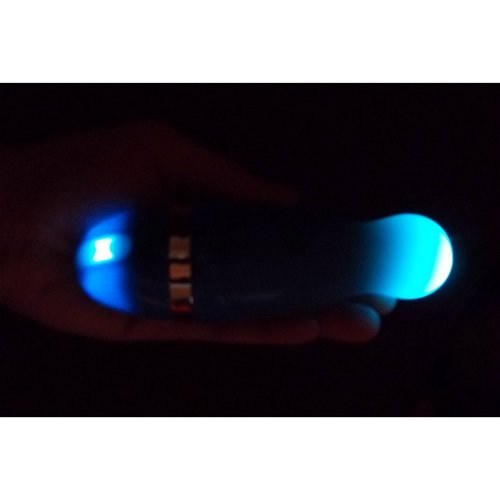 I was not expecting to like this toy even half as much as I do. The intensity is a lot higher too. I can come from this toy over a pair of VS pajama pants! It's a bit too intense at times to use directly on my clit. I love the pulses and the steady patterns. They're all good!

Inserting this vaginally it a little weird since it is only done shallowly. But anally, I like to pop in the bulb head. Again, for safety, don't go further than this! The intense vibration feels great! The bulb can also be used to press into knots in your muscles or feet.

The light show can be both cool and annoying. It kind of gets old with use, or at least it did for me. Sometimes it's cool to have it on and others, not so much. The biggest issue with this toy is the noise, but thankfully it can be taken in the shower! I'd say Craze Cutie is worth a try. It's a unique toy for sure.

Diamond Hope
$23.99
Follow-up commentary   I still like it 2 months after original review
Still an exciting toy, the Craze cutie is still in my top toy box. The shape is great for really targeting my clit, and the toy stays strong for a long time on a single set of batteries.
This content is the opinion of the submitting contributor and is not endorsed by EdenFantasys.com

Reviewed by ~LaUr3n~ (Eden Writer) I'm about as innocent as a nun doing pushups in a cucumber field!
Rank
7.4
wrote 725 reviews
Comments
Make a post
Forum
No discussions yet.
Thank you for viewing Craze cutie – discreet massager review page!
Top