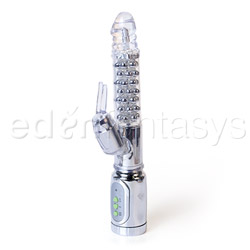 The Extreme Pure Gold has definitely earned its name. It was made with pure pleasure in mind and it stimulates every part of you. If you are looking for a good time this is a must-have toy.
Pros:
Large and prefect to stimulate all areas.
Cons:
It may be too big for beginners
Rating by reviewer:
5
extremely useful review

For foreplay, my husband and I used this before intercourse. I found that because of its size you should take things slow when using it for penetration. I love the big grip at the end because my husband could easily hold it and control it. It has 3 easy-to-use buttons on the bottom.

For solo play, again, the big grip area was nice. I found myself having to do very little work because the rotating beads, vibrations and clit stimulator did the work for me. It felt like it was trying to get itself deeper inside of me. At times I did nothing at all, just put it in place and leave it to do all the work, taking me very quickly to my orgasm and holding me there for quite some time.

The toy is marked as waterproof, though I myself have never used it underwater. I would assume if you do just make sure you battery compartment is closed tightly.

Because of its size this toy isn't discreet so don't attempt to hide it in your purse!

This toy, to me, had no taste or smell. The materials are plastic and TPE. It does seem to attract lint so please be sure to clean your toy both before and after use. The texture is ribbed because of the beads and it is also smooth. The head and top ribbed part are squishy, but when you get to the beads the texture becomes much harder. The rabbit ears are, again, squishy, which was the perfect texture for clitoris stimulation. I love the thickness of this toy! It really made it possible to hit all my pleasure zones. Because of the size of this toy I would say it's not for beginners unless they plan to take it slow.

The Extreme Pure Gold is designed with pure pleasure in mind! The top is squishy and because of the toy's length it is able to get deep inside and hit that perfect spot. I love that you can feel the vibrations all the way to the very top of this toy. The beads rotate and grind, massaging your vaginal walls. It feels like the toy is doing everything it can to get deeper inside. The width of this toy was perfect. Thick enough to let me know it was there without causing me discomfort. The clitoris stimulator has the perfect smooth soft texture to tease and taunt your clit into high sensation. With a bit of pressure the vibrations became stronger and were able to easily push me over the edge. The end where you put the batteries is large enough that I could easily hold the toy and control it. Length-wise I was unable to get the whole shaft inside of me, but that didn't matter; even partially inserted it was enough to push me over the edge. Everything about this toy was designed to give you pleasure. Not one area was forgotten, making it the perfect toy.

This toy is large so there will be no discreetly hiding it. I really think an advanced user will enjoy this toy more. I think a beginner may be a bit intimidated by The Extreme Pure Gold.

The Extreme pure gold has 3 functions: on/off, hi/lo and R/l. The on/off obviously controls if your toy is on or not. The hi/lo controls your vibration settings. I personally loved starting off low and working my way up; I think it built anticipation. And finally, the R/l controls which way your beads rotate. Nothing is more exciting than having something switch directions inside of you. I normally wait until I begin to orgasm to suddenly switch the rotation of my beads. The sensation is mind-blowing and it's enough to drag your orgasm out longer. I'm sure you can tell from my review the rotating balls are my favorite function of this toy. They made all the difference when playing.

The buttons are conveniently located on the side near the bottom and all in a row so they are always easy to locate and access. The batteries are inserted through the bottom. The Extreme Pure Gold is easy to use and the controls are really easy to figure out. The toy is waterproof, but I myself have never used it in the water so I can't comment on how well it performs there. It's not overly loud either. I used it when my husband was sleeping and it never woke him up.

I just use a mild soap and warm water to clean my toy. The toy is waterproof so it was easy to wash. I didn't have to worry about getting certain areas wet. After I had it clean I simply wiped it down with a soft cloth and put it away. The material makes it easy for hair and lint to become stuck to the toy so I always make sure to clean it both before and after each use. I wrap this toy in a soft cloth to help prevent a lot of lint build-up and I store it with my other toys. Because of its size I suggest having a larger area to store this toy. Also make sure not to put it away bent: I'm not sure but I think it may damage your toy.

I threw away the original packaging and now wrap it in a soft cloth for storing. The original package was not discreet. You would know right away what this is!
This content is the opinion of the submitting contributor and is not endorsed by EdenFantasys.com