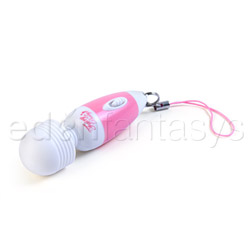 Fairy Baby, How I Love Thee!

The Fairy Baby can rival any discreet vibe out there! It is cute, speedy, and has multiple uses. It could be a real conversation piece as well! If you are looking for a vibe that is unique and really works the Fairy Baby is for you!
Pros:
Small,Cute,Rechargable
Cons:
Loud
Rating by reviewer:
5
extremely useful review
Fairy Baby, How I Love Thee

I could probably write you poetry for the beauty that is the Fairy Baby, or even in general for the line of Fairy massagers! I also own the Fairy Mini Wand Massager, so I have experienced the joy that is Fairy before! I have even been thinking about getting myself the Pocket Fairy, so you can definitely say that I am a fan!

I also like vibrators that are made for clit stimulation, because that is basically the only way that I get any satisfaction! I also liked that it was made out of plastic, because plastic is plastic is phthalates and latex free.


Lets face it. If you saw it on someone's key chain (which is apparently what the manufacturer must expect you to do with it, seeing as how it comes with a little pink string loop to put on a key chain) you wouldn't really know what it was.

It could easily be passed off as a general massager for all intents and purposes, because that is exactly what it looks like! It is pink & white, and it doesn't look like a sex toy at all.

When I received it, I could not believe how small that the Fairy Baby was! It was smaller than I had expected, but it was a pleasant surprise! To help you understand how small it is, the only thing that I can think to compare it to would be an PEZ candy dispenser!

I have small hands, and it fit perfectly between my thumb and first finger, which made it comfortable to hold. The only thing I can say is, maybe if you have bigger hands and it took you a little while to have an orgasm, it might cramp up your hands a little bit! I know it did with me a couple of times that I used it, so I can only imagine if you had larger hands!


The Fairy Baby is very simple to operate. It has one main on and off switch, and only one speed. The package boasts 12,500 Rpm's per minute! It is so tiny, that I honestly couldn't even fathom that it would be that powerful when I first got it. With only one speed, it doesn't leave a lot of wiggle room, but with a speed that powerful I can't complain.

With those 12,500 Rpm's though, you get a lot of NOISE ! It really didn't bother me, and if you were using it under covers and/or watching something while you were playing with it, you probably wouldn't have any problems!

A bonus with the 12,500 Rpm's is that you can get off fairly quickly! I had no trouble with positioning it where it needed to be and quickly being satisfied!

I think the most awesome thing about this Fairy Baby is that it is RECHARGEABLE. You aren't tied down to the wall when trying to use it, or trying to find batteries when it runs down. It doesn't charge in a typical way either. You charge it through a usb cord! I can honestly say that I have never charged mine since I got it, and several times later it is still going strong!

One thing that wasn’t so cool about the Fairy Baby is that the head doesn’t really pivot. I know that isn’t really the purpose, but I know that you can use most of the other fairy vibes as an all over your body type massager! I mean, you could still do that with this one, but maybe not as well!


I decided to clean my Fairy Baby with one of those alcohol prep wipes! It seemingly has worked well. If you didn't have any of those, using soap and water on a washcloth would work just as well. Keep in mind the Fairy Baby isn't waterproof or splashproof, so you wouldn't want to run it under water!

As far as storing it, you could really be creative and keep it laying about, put it on your keyring, or just put it in your collection.

In all the Fairy baby is cute, discreet, powerful. It helps to prove the old adage "good things come in small packages".
This product was provided free of charge to the reviewer. This review is in compliance with the FTC guidelines.