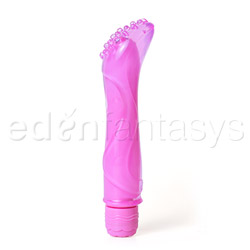 This may be called a "teaser", but it can take you all the way. It has a variety of vibration intensities from a very soft and quiet, to one that's extremely intense and a bit loud. With most vibrators, the sound can be dulled by covering yourself with a pillow or blanket. But if you have the Softee turned all the way up, that probably won't work.

It's made of TPE (also known as TPR) with a hard plastic center, and control dial. TPE is a rubber polymer blend, that has an interesting jelly-like squishy feeling. The squishy feeling makes it wonderfully flexible. It does have a very interesting smell though. You really can't smell it unless you have it right next to your face, but it does smell kind of like new plastic.

The flexibility is also really nice because you can really get as much use of those nubs as possible, by pushing down, or moving it around.

Also, a great thing about TPE is that you can use both water based, and silicone based lube with it.

It's almost shaped like a hockey stick. It has a long handle part, then a little ledge that kind of sticks out, that you can press against your clit. The bottom part of that ledge part is covered in little nubs that feel wonderful.

It has a really gorgeous design. It's pink (also comes in purple) with an "S" shaped sort of design going from the nubs all the way down to where the control knob is. 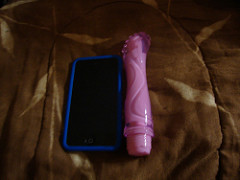 The vibrations are controlled by a small twisting knob at the bottom. It's extremely easy to use. Just twist the knob to the right, and you can intensify the vibrations; and twist it to the left to slow it down again.

It's also waterproof, and performs fantastically in the water. You can use it in the bath, shower, or pool.

This is extremely easy to care for. It's made of TPE, so it's more porous than silicone. If you share this toy, you and whoever else uses it should use a condom with it. It cannot be sterilized with boiling water like some toys, but can be cleaned using warm water and mild soap or toy cleaner.

You can either keep it in it's package, or store it in a drawer or something like that. It's not silicone, so you don't have to worry about any chemical reactions with other toys either. If you have a toy box, you could keep it in there too. 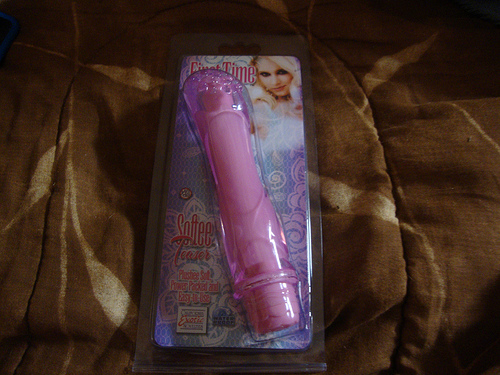