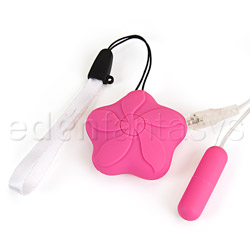 The Little Daisy is a dainty little bullet with a heck of a lot of power! This tiny bullet is perfect for pinpoint clitoral stimulation. While intended for clitoral stimulation, it can very well be used to tease areas such as the nipples, inner thighs, perineum, or anywhere you like a little tingle. You can fly solo or with a partner with this toy. It's great for massaging the clit while receiving oral sex and it's even small enough to fit nicely between two bodies during intercourse without getting in the way. This is also waterproof so you can take it to the shower for some water time fun.

For most, this bullet would probably be considered a novelty toy. It's small design make it ideal for beginners - it doesn't get any less intimidating than the Little Daisy! This would also make a great gift, say at a bachelorette party?

The Little Daisy is made of plastic with a matte velvety coating which is one of my favorites. It’s also phthalates-free, latex-free, non-porous and hypo-allergenic. With a little added lube, the velvety finish glides so nicely over my clit and the raised petal shaped textures on the daisy controller make it easy to grip for when things get slippery. It has no taste or smell, even right out of the box.

The Little Daisy is one of them toys that makes you go "awwwwe". It's just so darn cunning! The bullet is teeny tiny, at barely an inch and half long and about as thick as a pencil. It's the smallest bullet I have ever seen or used! The bullet plugs into the controller via jack and is a generous 34 inches long. The controller is shaped like a daisy, which is small as well and fits beautifully in the palm of my hand. Attached to the daisy is a wrist strap. The strap is short though, it doesn't fit over my tiny wrist and I honestly don't know whose wrist it actually would fit over - but it's there if you want it.

The bullet and controller store nicely and discreetly in a drawstring pouch. It is compact and discreet and a great size for traveling so you can take your tiny bullet anywhere with you. It doesn't take up much room at all. Throw it in your purse or suitcase and you are good to go!

This is a discreet toy but one you will want to show to your friends!

The Little Daisy has 7 functions! The vibrations are controlled via a push button located in the center of the daisy. It's a single button so do you have to scroll through the patterns of vibrations before you can turn it off again. No biggie. If worse comes to worse, you can always unplug the bullet from the control pack in case of an emergency. There are three levels of steady vibrations, three pulsing patterns, and then back to a high steady vibration. The bullet runs on four watch batteries - it's pretty powerful for such a tiny thing! The vibrations are quite intense but super buzzy - and not the deep throbbing kind either. But that is to be expected with such a tiny bullet. They are still pretty impressive!

Plastic is about the easiest material to take care of. It can be cleaned simply with warm water and an antibacterial soap or toy cleaner. And if you wish, it can also be sterilized with alcohol. The jacked cord also lowers the risk of getting water on the control pack during cleaning. After washing, pat the toy dry and store it in a dry, cool place. Being a bullet, I store it in a drawstring bag (as I do all my bullets) to avoid tangling of the cords. However, plastic can be stored just about anywhere and is also toy box friendly so no worry of it reacting with other materials in your toy box.

The beauty about plastic is that it is compatible with virtually any lube you wish to use, although this tiny wonder needs little to no lube to be enjoyable!

The Little Daisy came packaged in a small cardboard box with the toy clearly displayed through the front. There were no instructions included and very little information on the box itself. It would be suitable for gift giving depending on the occasion, of course. You might not want to gift this during a family gathering - but then again, I don't know your family!

After "Ooohing" and "Ahhhing" over the cuteness of The Little Daisy, I soon discovered how well she felt nestled against my clit and with a little bit a circular motion I was brought to an orgasm within 60 seconds - I know, I was surprised too! I found myself grabbing for this tiny wonder more than I had expected. Sadly, it only lasted me three solo jack-off sessions before the batteries died - I have yet to replace them.

Power bud bullet
$19.99
Follow-up commentary   I still like it 3 months after original review
While I still like this toy and find it to be extremely cute, it's not one of my favorites and remains at the bottom of my toy box. Truth be told, I never replenished this toy with batteries since the first set died. I still recommend this for anybody who has never experienced with bullet vibes before. It's a perfect beginner toy!
This content is the opinion of the submitting contributor and is not endorsed by EdenFantasys.com