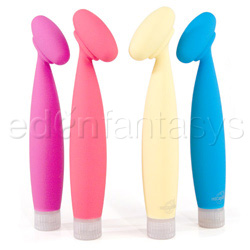 That said, this toy does provide a kind of pleasant, weak vibration that feels nice on my clitoris during intercourse. Just enough motion to provide that extra oomph that I sometimes need.

I bought this because I had felt it in a store and was really intrigued by the texture. The product description calls it velvety, and it almost is, in a hard plastic kind of way. It isn't soft in any way and there isn't any give to it when you hold it, but it feels really nice in your hands. I had thought it might have a strange smell, due to the coating used to give it the velvety feeling, but there was no odor whatsoever when I took my new toy out of its package.

The shaft is much shorter and thinner than you would guess from the pictures. The bullet on the end is at an awkward angle that doesn't come close to approximating the angle needed to reach my g spot. I've seen that another reviewer compared this toy to a crochet hook, but when I see it I think more of a toothbrush with the head slightly askance.

I tend to prefer rigid, non-porous vibes and dildos so I had thought I would love those features with my Velvet G. The size, however, is all wrong for me. It is so thin that it is difficult to feel where it is when trying to direct it to the right spot. This resulted in several mishaps involving pain near my pubic bone, cervix, etc. Once I did get it steered to the right spot, I was underwhelmed by the power of the vibration. I decided to give the Velvet G a second chance after a few days but quickly realized it wasn't going to get any better. I can't imagine ever having an orgasm from inserting this toy.

Determined to not let my money go to waste, I tried to find another use for this toy. There's something about the texture that makes me just love rubbing it (turned on or not) all over my body. The amount of vibration feels really good on my nipples, but the shaft length and rigidity make it kind of awkward to hold it there for too long. Ditto for my clitoris- the vibration (too weak to be orgasm-inducing) feels really nice, but after a few minutes I got a bad wrist cramp and had to stop.

There's very little, if any, vibration in the bottom 2/3 of the shaft. The top of the shaft and the head vibrate more. I think there are supposed to be three levels of intensity for the Velvet G, but in reality turning the dial will take you from "barely feel it" to "oh-I think it is vibrating now." While I am a Magic Wand junkie and know that I need more stimulation than others, I really don't think this provides enough stimulation for even a beginner to enjoy.

The noise is about average for vibrators in general, and much above average based on the power this thing delivers.

The shape of the head is kind of graduated, which means that there are a few nooks and crannies that are hard to clean. You're not supposed to boil it, so the best you can do to clean it is alcohol. I don't share my toys, so that isn't a big problem for me.
I didn't try to use any lubricant with it, but water-based or silicone should work if needed.
The Velvet G is compact enough that you can easily toss it into your purse/overnight bag/etc., but I don't like mine enough to want to take it anywhere.

The packaging is unremarkable, just the typical plastic box. I threw mine away since it wasn't really durable enough to reuse.
Follow-up commentary   I still don't like it 6 months after original review
I found this toy at the back of my nightstand drawer recently. To tell the truth, I had completely forgotten I had it. I decided to try it out, and I remember now why it had been forgotten at the back of the drawer.

The texture of the toy is still great; I cannot say enough good things about the velvet cote texture. That however, is where the good things end. The toy is weak, the head is at an awkward angle, and this toy failed to do anything for my g-spot.

I thought about throwing this toy away, but I like the velvet cote feeling too much to part with it. I put it back in the drawer and made a mental note to buy better velvet cote toys in my next order.
This content is the opinion of the submitting contributor and is not endorsed by EdenFantasys.com