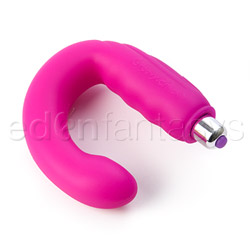 This is not a dime-store adult toy. You're definitely getting your money's worth with this lil' chick as it's versatile and durable.
Pros
Well-designed bullet, a lot of play potential, not easy to break.
Cons
Standard color, shape could be problematic, potential silicone issues.
Rating by reviewer:
4
useful review
I got Groovy Chick about a week ago. The box it came in was a true display box like you'd see for typical kid's toys. Except this one has the manufacturer's name, Rocks-Off, embossed in silver across the front. The back had a diagram of how to use the item along with some catchy log-lines like "groovy-chick is shagadelic." It does come with an instruction manual, but it's less a manual and more a product catalog.

The item is listed as "100% waterproof," so I submerged the bullet in water for while with it still on. Surprisingly, it didn't die. (I don't think it'd survive a industrial blender though.) The bullet is fairly strong and does make the entire dildo vibrate enough that it reaches a happy medium range, something not often found in toys that have a single battery system. The only major flaw I found with the bullet is the one push button located on the top make it easy for the item to accidentally be turned off and on either during use or storage.

As far as noise, keep in mind that if you have any intention of "riding it" that will raise the noise level substantially (enough to at least let people in the same house/apartment as you figure out what you're doing).
This product was provided free of charge to the reviewer. This review is in compliance with the FTC guidelines.

Become a Reviewer
My Groovy Chick tags
About author