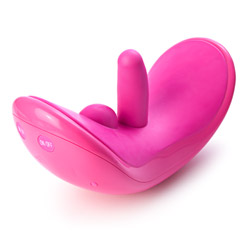 The iRide delivers exactly what it promises, a hands free experience that puts you in control of the vibration and penetration. While future models may look to offer extra features and frills, this under $100 toy is well worth the ease of use and authentic sensations.
Pros
Versatile for every experience level, helpful for couples, dual vibe, contoured, hands free
Cons
Plastic base loud on hard surfaces, more traction needed for base, buttons lack differentiation
Rating by reviewer:
4
extremely useful review

The iRide is intended for flat surfaces and can be a little stiff in the shaft, so caution is suggested for initial adjusting. Once you're familiar with the angles of penetration (about 4", with 5" girth), you can move on to the spooning position, or try it out on chairs, couches, and just about anywhere with traction for plastic! Worried about bringing such a bold toy into the bedroom? He'll love that you can focus on his member while iRiding on yours!

I didn't notice a material smell out of the box, but when put to the nose a light plastic aroma can be sensed. The shell of this toy is made from hard plastic, which wraps around the sides partially, and can add noise on hard surfaces. The inside, or top, which covers the probe and bump, is made from a softer material what allows for moderate flexibility when in use. To clarify the shaft, when inserted will bend to an extent, the base of the iRide is stationary and meant for rocking. As this toy is not suitable for typical sanitation processes I suggest surface cleaning immediately to ensure the softer material doesn't attract dust and lint. There are powders meant to maintain texture you can dust the surface with after cleaning to extend life. For those not allergic to latex, I also recommend using affordable condoms when in use for extra sanitation, and easy cleaning combined with toy wipes.

I loved the iRide from the moment I saw it online, and this cute, bold toy did not disappoint in person. It's feminine pink color and petite footprint offers everything a girl needs to ride her way to bliss. The minimalistic width offers a more comfortable ride for larger frames, and the curved body provides a versatile rock. The probe's size itself is just right to angle comfortably for all shapes and sizes, though I found myself wishing the 'bump' was a little more pronounced. While I can't say this is a discreet toy (for storing), I do thing it is friendly enough for those intimidated by realistic vibes, and compact for what it does.

The dual vibrators with 3 speeds is integrated pleasantly with 2 easy push buttons on the base's front. It took me a while to remember which button was for which vibrator, and I wish there was a was to tell the difference through feeling (perhaps one button could be raised or ridged?). The iRide in general reminds me of a pink maxi-pad, a very fun maxi-pad, and the plastic outer shell can be intimidating at times. I had trouble maneuvering flat on my bed and utilized a large throw pillow for added depth. With the extra height, I was able to angle the vibes perfectly and release in just seconds. I hardly had time to mess with the speeds my first time around!

One of the features I love best about this toy is the option to use one or both of the vibes. Some respond more to G-Spot stimulation, and others may just plain be too sensitive for clitoral stimulation. This allows beginners to play around and experiment without the awkward learning period involving a partner, and provide more confidence during actual intercourse. I also enjoyed the rocking feature, which makes for a hands free good time from a simple twist of the hips. Use the iRide while giving fellatio to pleasure your partner at the same time-great for those experiencing ED or for men who are orally focused. Just be careful because those vibes can make it hard to focus!

In general, the iRide is fairly quiet. The motor is less noisy than I had anticipated, and when used on soft surfaces, the rocking can be muffled as well. I found it easy to clean, but noted the probe is made from a separate piece, which can be seen where the base meets the shaft. I was a bit put of by this, because it makes cleaning for sanitation a bit trickier. I also would like to see this perhaps integrated into an edition where the shaft could be exchanged for new textures, widths, and depths.

The iRide does what it promises, and offers and easy to master experience. The vibes in general are medium in strength, though the shaft's highest setting (3) can become a little painful and make it seem more rigid than it really is. I liked how the saddle like shape hugged my front and rolled along my back, as well as the level of comfort when laying on my side.

This toy uses 4 lightweight AA batteries, which are inserted into a cavity in the bottom. I wasn't thrilled or disappointed by the battery life-it is what it is, and I suggest re-chargeable AAs if possible (none are included in the package, but may be added on at checkout).

Other than the area, at the base of the shaft, where the product has a visible separation, the iRide should be easy to clean with toy wipes. Use a condom for extra sanitation, and be sure to fully clean and dry the toy after each use. If proper care isn't given the soft surfaces will collect lint and dust, making it less attractive and clean!

My iRide arrived in a colorful Doc Johnson box with front window for full view of the product. Instructions were minimal, and mainly on the box's exterior. Positions were suggested, as well as battery requirements.

I was initially delighted with the weight and footprint of this device, glad to see the 4" probe was big enough for satisfaction, yet small enough as to not intimidate him or her. I loved the color, though found myself wishing the hard plastic shell was made of a different material, offering more traction.

My first idea was to use the iRide on my bed, as naturally as possible. To accomplish this the toy must be raised to a natural height, easier said than done. With traditional bed pillows, they must be folded or doubled. I you're going that route, stack two on top of each other and place the iRide vertically along it, so as to mimic a body most naturally. This also will limit slipping, which the plastic bottom tends to do when rocking.

The iRide was most effective for me with the buttons in the front, and riding with my body as straight up as possible. I was most effectively able to manipulate the vibes with my hips, while stabilizing the base this way. Once again, it was a little annoying to have to play with the buttons to figure out which was which. I didn't care for cycling back up through the higher level 'in the heat' of the moment because I'd hit the wrong one. I came incredibly fast with my first use and was delighted to note my orgasm was much better than any manually stimulated one I'd been able to achieve on my own.

My only downside was how hard the shaft became for me once I'd came-everything tended to clamp down and the shaft wasn't very forgiving as I tried to rock my way towards a second clitoral orgasm. In general, clean up was a breeze, and storing fairly easy. I have to give this toy a 4, instead of 5, for the simple reason it is a new concept and can be tweaked for comfort and personalization a bit more. When I shell out $99 (which this is well worth), I want more bells and whistles. Buyers can use extenders and sleeves to change it up, but for the most part, you get what you get.
This content is the opinion of the submitting contributor and is not endorsed by EdenFantasys.com