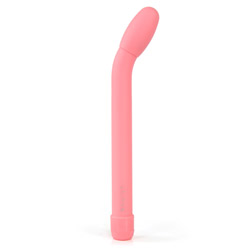 Some of the things I did enjoy about this toy include the size, noise level, texture.

The size is great for adding this guy to your "on the go" or overnight bag, because it's thin and not too long (7 inches long). It's also very quiet, so it makes for a great toy to sneak in some fun. As for the texture, it's a wonderful texture. I love the velvety feel of the PU-coated plastic, but otherwise, it doesn't do much for the pleasure.

The several things that I didn't like about this toy include the vibration power, the angle of the head (or lack thereof), the way to increase the vibration, and how thin it is.

This toy just does not provide you with a powerful stimulation. The highest speed is equivalent to the lowest speed on my other toys and for me, I prefer a stronger vibration for my G-spot since it's less sensitive than my clitoris. I also wish that it was easier to change the speed of the vibrations without using your other hand to turn the small cap - it really doesn't help when things get slippery or you have another toy in play (more on that later).

The angle of the head also throws me off a bit; I wish that it was a little more bent, so that when using it you don't have to angle the actual toy as much by yourself. It's also small (as stated above), so the stimulation is very direct, if there even is any for you. This can be a good thing, but it just didn't have that "oompf" that I was looking for.

My experiences with this toy are a little limited. I've given it several chances to find its place in my toy ranking and I have to say that it's low on the list.

I wouldn't try this toy out with a partner because it's not very exciting to me anymore and all-in-all, I have better options. If this was my only toy, I'd probably choose manual stimulation more often than not.
This content is the opinion of the submitting contributor and is not endorsed by EdenFantasys.com

My Bgee tags
About author