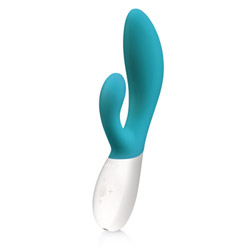 I bought this toy on a whim as I thought it was novel idea to have the toy move internally; however, I never expected it to be more than a gimmick. Even after only trying the toy once, it has already become my girlfriend's favorite toy and her reactions/enjoyment of this toy, made giving it a try worth it. So if you are looking for a "rabbit" toy and really need g-spot engagement to find sexual release/enjoyment, this is a great toy to try!!
Pros:
Luxurious silicone
Powerful vibrations
Wave motion
Cons:
No plug for charging port
Rating by reviewer:
5
extremely useful review

The best use of this toy is by women who really need consistent g-spot stimulation to come to orgasm. Thankfully my partner has had no issues with inserting or using this toy; however, it also helps that we have only used it after significant foreplay and post-sex as additional stimulation for her after I've fully exhausted myself. This allows her to be significantly relaxed prior to inserting the toy. We've used the toy while she's been on her back, and also while she's on her side (while I hold her close).

The toy is 100% waterproof so can be used in a tub/shower/pool if so desired; however, this toy unlike many of the other Lelo toys we have does not have any kind of plug to keep water/lube out of the charge port... so this may make it harder to clean.

The smooth silicone make inserting the toy super easy and requires minimal lube to insert, in the off chance you don't create enough of your own lubrication to use the toy.

The inserted part of the toy is very rigid and not flexible; however, it will move when that feature is powered on. The smaller end that rests against the clitoris has significant flex to adjust to a large number of body types.

This is our first rabbit toy; however, the design of this worked exactly as expected. The larger end inserted easily into my partner vaginally. And she reported no discomfort from the toy with the smaller end resting as designed on top of the clitoris area. I know some reviews, I read, indicated some initial discomfort; however, likely due to the warm up prior to use this was not something we observed.

I'll go into more details on the features/performance in that section; however, the toy is designed to have the inserted end move back forth towards the small end, resulting in a "come hither" finger-like motion while inserted that should apply/remove pressure from from the g-spot in a regular pattern set by the different device modes. I had thought the design was going to be more of a gimmick; however, based on my girlfriend's reaction to the toy... seems that it is very effective at bringing g-spot based pleasure + clitoris vibrations. The most I got out of her regarding the toy was pretty much an "OMG" and "that's my new favorite toy". I'm only slightly concerned she's going to leave me for the toy...

The toy is controlled from the white non-silicone plastic handle part of the toy. There are 5 buttons as you can see in the picture below: 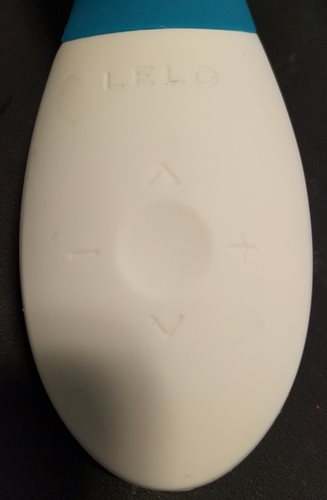 The dimple button, is the on/off switch. Then there is a forward, back, plus, and minus button on each cardinal direction surrounding the dimple button in the middle. The toy has memory of the settings it was last used with, so when you turn it on it'll go back to that last setting. The upside of this is if there is a specific pattern and intensity that works best for you with this toy, you can return to it without having to remember where it is/cycling through the other modes first.

So for orientation, I'm going to call the forward button the button towards the part of the toy that is inserted and the back button is opposite. The toy claims to have 10 different vibration modes, which have different patterns and in some cases use the wave feature and in other cases doesn't. The modes don't cycle around, so starting with the mode that is the farthest back:

In addition to the different modes, you can increase/decrease the vibration intensity with the +/- buttons. We still haven't used the toy fully powered; however, even in the middle of the intensity this toy can deliver it resulted in some intense reactions from my partner. She also really enjoyed the wave sensations, though couldn't coherently communicate what it felt like only that she really enjoyed this toy. Definitely going to be in our bedside toy box for the foreseeable future considering how much she enjoys it.

It's less noticeable when in use; however, if you are holding it out in the open it makes significant noise, especially the wave motion. It's doubtful someone in another room could hear it while being used under the covers... but it also is not quiet enough to be perfectly discreet.

The toy recharges with a provided charger, which is plugged into the base of the toy. The Lelo symbol above the buttons will then flash with a white LED that backlights it until it's fully charged. Once fully charged the LED light will stay constantly lit.

The toy is silicone, so should only be used with water-based lubes. It definitely should never be used with silicone lube as silicone doesn't play nice with other silicone. Water-based lubes also come off easily with water, and this toy is remarkably easy to clean with the smooth silicone used by Lelo. It's also waterproof so it's super easy to clean without worrying about some parts getting wet... so I just run it under the faucet until it's clean. I usually wipe it down with some rubbing alcohol, that I then rinse off before storing the toy.

We currently store the toy in the box that the toy came in; however, they provide a nice bag with the toy for storage to prevent it from interacting with your other toys and damaging the wonderful silicone material.
Follow-up commentary   I still like it 3 months after original review
This is still my girlfriend's favorite toy of all the toys we have gotten, tried, reviewed, etc... Stays in our nightstand as you never know when you want to bring a favorite into play.
This product was provided at a discounted price in exchange for an unbiased review. This review is in compliance with the FTC guidelines.