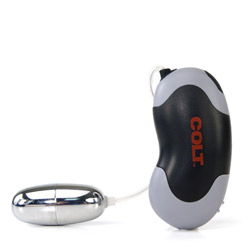 Xtreme Is An Understatement!

I love the Colt Xtreme Turbo Bullet. This is a no-frills, very strong toy that is easy to use, easy to maintain, and fun to have around. It just may be the best vibe I've ever used.
Pros:
Strong, simple, reliable
Cons:
Basic vibrations, loud
Rating by reviewer:
5
extremely useful review

The description of the Colt Xtreme Turbo Bullet says that its waterproof though I'm not sure if it applies to only the bullet or the handheld part as well. I was leery of testing the product in water, as there are seams on both the bullet and the battery pack, which made me nervous.

The bullet itself is a shiny smooth plastic with a chrome finish and a seam across the center. The chrome finish is bright and reflective. There is absolutely no give in the material of the bullet; it's completely hard. The battery pack/hand held portion is also a hard plastic, is ergonomically shaped to fit in the user's hand, and looks similar to a kidney bean. The on/off button has a velvety, grippy texture in contrast to the smoothness of the rest of the plastic. This makes it easier to find the button, even in throes of pleasure.

Although both parts of the toy are smooth plastic, which is nonporous, there are seams on both the bullet itself and the battery pack, so it is a bit difficult to clean, should any build up get into the grooves.

There was absolutely no odor from the toy.

The bullet itself is about 2.5 inches long, and about 3 inches in circumference, similar in size and shape to a date (the fruit). The cord is a generous 29 inches long. The battery pack is 4 inches long and fits comfortably in my hand.

I've only owned one bullet before this, and while I enjoy the handheld usability of them, the difficulty comes from having to hold the bullet wherever I'm using it. This bullet in particular has very, very strong vibrations and I can't hold onto the bullet itself, I have to hold the wire above it and sort of hang it in the right area. It works fine and truly gets the job done, but is a bit cumbersome.

The Colt Xtreme Turbo Bullet is plainly colored in chrome, grey, and black, with a red COLT across the battery pack. It really looks like a no frills bullet toy, and as such, is not very discreet.

The button that controls the speeds is easy to find and easy to press. Press once to turn it on, a second time to get to the higher level, and a third time to turn off the toy. There is no pattern in the vibrations; it's one solid BZZZZZ, on both levels. One is simply slightly stronger than the other.

I for one really enjoy strong vibrations, both directly and indirectly on my clitoris, and this delivers. It got me to one of the quickest orgasms I've had, and was truly enjoyable. For someone who is new to vibrators, I would say start with something more gentle and work your way up because this is a no-joke vibe. It does one thing and does it well.

The vibrations are concentrated in the bullet, and not just one part of the bullet, the entire thing. It's like you turn on the toy and it just glows with energy. It's a no frills, heavy duty bullet. And although my sessions with this are usually quick, I don't notice a dip in power that sometimes happens with vibrators. This starts strong and stays that way.

Plastic can be cleaned with antibacterial soap and hot water, or wiped down with isopropyl alcohol to sanitize. Any variety of lube can be used with this toy; oil, silicone or water based.

Both of these cleaning techniques work on the Colt Xtreme Turbo Bullet, one just needs to be aware to clean inside the seams on the bullet to ensure any build up is taken care of.

Overall, this bullet is very easy to clean and maintain.
This product was provided free of charge to the reviewer. This review is in compliance with the FTC guidelines.