An Interview With a Naturalist. Or Naturist. The One That Isn’t Nude. 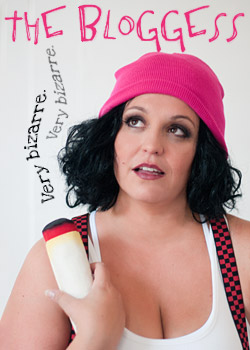 Last week I went on an Alaskan cruise, and in spite of the fact that I was with my parents AND my child on a family vacation, I still managed to wrangle the ship’s Nature expert into a wholly inappropriate interview for my sex column.
It’s a talent. My husband calls it an illness. We’ve agreed to disagree.

(Out of respect for the brilliant nature speaker I’m just going to call him Graham, so that he doesn’t accidentally get fired simply because I don’t understand boundaries of polite conversation.)

Me: I had a friend who recently had a nervous breakdown and then became a naturist, which I assumed meant he was into bird-watching now, but turns out it means he’s a full-time nudist. I know your title is “naturalist” which seems really confusing. Do you ever accidentally get asked to speak at naturist seminars?

Graham: I get asked that question a lot, but I’ve never been asked to speak to naturists. I’m encouraged to keep my clothes on during all presentations.

Me: That sounds very limiting. Yesterday I watched your seminar on sea life and you mentioned a study where a hammerhead shark had a virgin birth even though she hadn’t been around any males in years. Would this be considered immaculate conception, and if so, is it possible that this is the Jesus Christ of Sharks?

Graham: No, I think not. There were no three great white sharks who suddenly showed up with gifts.

Me: Could it be the anti-Christ, then? Because a hammerhead shark would make a bad-ass anti-Christ, in my opinion.

Graham: Unlikely. Sharks have an unwarranted bad reputation. Peter Benchley, the man who wrote Jaws, later regretted that his novel led to sharks being viewed as villains rather than victims.

Me: I’m going to write that one down as a “maybe.” A few weeks ago I wrote about one of the worlds loudest animals, who makes noise by rubbing his penis across his belly. Could nature be any more disgusting?

Graham: I would take issue with the word “disgusting.” I would say… “inventive.” To pass on your genetic message you have to use whatever is at your disposal. Sometimes you have to use your penis, whether you want to or not.

Me: I want that on a t-shirt. A few years ago I was in Japan, writing about human sexuality, and it led me to sex dungeons and medical fetishes and stuff I can’t even write about. Are there any animals that surpass the bizarre and imaginative depravity of humans?

Graham: Certainly. The bonobo is a primate that uses sex for everything…conflict resolution, fun, casual greetings.

Me: Wait, is that the same chimp that made a frog give him a blow-job?

Me: There’s a video on youtube of a monkey at the zoo getting a forced blow-job from a frog. True story.

Graham: Well, that sounds practically apocalyptical. When a frog is blowing a chimp, the end is nigh. Prepare yourselves.

Graham: Well, that’s one of the problems with being on the bottom of the food chain, isn’t it? No mantis gay bars. One of my favorite New Yorker cartoons has two mantises standing together -one headless- as the other says, “You slept with her, didn’t you?”

Me: Love it. We’ve made several stops in the Tongass National Forest. How many times do have to say that out loud before I stop wanting to giggle?

Graham: Ah. Some people will laugh at anything.

Graham: I am shocked to say that I have never seen that.

Graham: Oh, I’m jotting it all down in my journal to research later.

Me: Fair enough. Last question… in an epic battle for world domination, who would win…zombies or unicorns?

Graham: Zombies, because unicorns have no real weapons but their horns. If they get taken from behind they have no real defense.

Me: I’m pretty sure you didn’t mean that to be sexual, but I’m going to assume that you did just for my own entertainment.