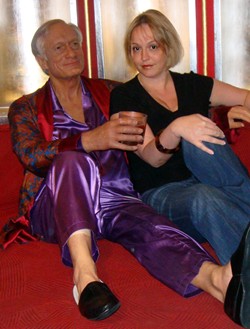 The Author, with Hugh Hefner, at an undisclosed location
There are a lot of perfectly normal people out there who like latex and bondage. I’m not judging those people.

Okay, I’m judging them a little.

But only because I just found a site that is so completely baffling that I assumed it must be a joke. But it’s not. Not. a joke. at all. Which kind of makes it even more hysterical. And horrible.

Let’s explore, shall we? Personally I prefer a Posturepedic, but hey, whatever works for you. Also, this is pretty much the most normal thing on their entire whole site. Get prepared, y’all. I guess it’s for people who enjoy having sex with donuts? I’m not sure. That’s pretty much the stuff of nightmares there. But the good news is that it can’t get any weirder than that, right? Let’s move on. It’s nice to see that Violet Beauregard is still getting work. This one is a personal favorite simply because all the sentences in the description inexplicably have superfluous question marks, as if even the people making it aren’t sure why you would ever want this. You can almost hear them laughing at you. Clever use of Ayn Rand to block nudity however… … “The Fountainhead“ would have been a more obvious choice.

Okay, at this point in looking through this website I’ve grown kind of immune to the bizarreness and I’ve become numb to the…Oh. Mother. Fucker. Never mind. “This latex pregnancy suit may be the only one of its kind in the world.” Well, we can certainly hope so.

By the time I found this one I began to suspect that I was suffering from some sort of concussion that was causing horrible hallucinations. It was a concern the manufacturers seemed to foresee according to the description. When I first saw this one I thought latex ghost, right? But no. It’s a latex burqa. “Custom made for one of our clients.” Of course it is. I need a raise, SexIs. A large one. Just forward it directly to my psychiatrist. I’m going to go lay down now.
Tags:
Views: 2830
Related articles