The Naked Reader Book Club: That is So NOT Sexy! 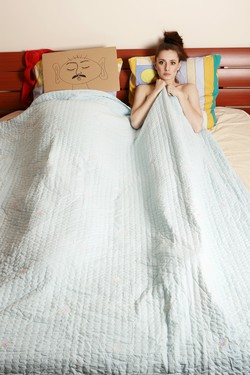 There is good erotica, and there is bad erotica. When it's good, it's very, very good. When it's bad...it's almost always usually good for a laugh. But why is it so hard to write the good stuff? Here's one man's theory.

Once upon a time, I thought all so-called literary erotica started exactly the same formulaic way:

I used to think that all your letters were made up by (Ivy League undergraduates, volunteer firemen, pizza delivery boys, convenience store clerks, et. al.) But ever since my encounter with (our neighbor’s babysitter, my best friend’s mom, the Canadian women’s curling team, my hot math teacher, et. al.) I know they must all be true!

And they would go from there. They all came from some sort of porno Mad Libs book. Teenage boys everywhere thought these were the greatest stories ever, until they grew up a little and started having sex and became college students or pizza boys or whatever, at which point Penthouse Letters became absolutely hilarious, the kind of shit you would read aloud when you were stoned with your buddies, and you would laugh until the tears ran down your face as Steve, a starting all-Ivy tackle who wasn’t even high, gave a dramatic reading, shifting to falsetto for the female role:

“Now fuck me like you just got out of prison,” she says breathlessly. “Slam that throbbing man-meat into my pussy. Now!”

And as I remember it, that was the cue for Steve’s girlfriend to come walking in the dorm room door, which was even funnier for everyone except for Steve, who never read for us again.

Today, of course, the whole thing would be on YouTube, and Steve never would have gotten into grad school. But you can’t tell me the market for bad, unintentionally funny erotic writing has gone away. Because the snippets I’m sharing with you come from the here and now. It’s the same damned stuff, aimed directly at males, 18 to 34. I know this because an editor at Penthouse told me as much recently; and also an acquaintance of mine who is 20, going to college and has part-time jobs as both a convenience store clerk AND as a pizza delivery boy, told me that guys still love to laugh at bad pornographic writing.

Then he called me “a throbbing bonerhead,” but in a friendly way. And we got a laugh out of that. Guys are so predictable sometimes, but we’re fine with that, really.

And we never entirely grow out of it. Even today—right now, in fact—I can manufacture a perfectly serviceable fantasy, in my head, out of little more than a libidinous librarian and an overdue book. But if I tried to WRITE that story it might come out a little like this passage from something I just lifted and paraphrased from (where else?) lustylibrary.com.

“… ‘This is just —‘ he pulled off his tee-shirt, revealing bulging bronzed muscles — ‘what I need.’ He pulled off his shorts and his cock was so beautiful, a big vibrating fire hose. I gave a hoot of pleasure. ‘I need me a nice little librarian!’ he said, swooping down on me. His sex pushed my legs apart and went into me like a bull goes into a doe. He was rutting, fucking …”

Obviously, this was imagined as part of a woman’s fantasy, and it is only one paragraph out of a 3,000-word story that a lot of readers, overall, grade as pretty damned steamy. But I count, in those five sentences, five phrases that completely crack me up, and I’m not stoned at all.
And I bet you, dear reader, can pick them out as well.

Whose Bad is it, Anyway?

Some of the best writers in the whole world pull a complete FAIL when it comes to the sex scenes in otherwise critically acclaimed literary works. The Literary Review even gives out an annual “Bad Sex in Fiction Writing” award, presented most recently in November to Jonathan Littell for The Kindly Ones, a novel that sold over a million copies in Europe, though probably not because of this particular part:

“… Now I was the one looking inside, searching the depths of this body with my radiant third eye, as her own single eye irradiated me and we blinded each other mutually: without moving, I came in an immense splash of white light, as she cried out: ‘What are you doing, what are you doing?’ and I laughed out loud, sperm still gushing in huge spurts from my penis, jubilant, I bit deep into her vulva to swallow it whole, and my eyes finally opened, cleared, and saw everything.”

And the only way that is sexy, at least to me, is if it is being read aloud by a half-naked librarian who is giving hoots of pleasure as she gazes upon my big, vibrating fire hose. What is most noteworthy to me about the Literary Review’s ten finalists for the award, however, was not so much the unremitting lack of sexiness in the prose. It was that there was only one woman represented … almost as a token, as far as I’m concerned, because what Sanjida O’Connell wrote in “The Naked Name of Love” actually strikes me as hot:

“She smiled, wide-eyed, lithe as a cat, she twisted her body, took his hand and showed him what to do; he felt her breath hot against his throat, her pulse quicken, limbs grow taut.
“He was hanging in deep green water, waves breaking against him, the clean sweep of the shore attainable in a few slow strokes.

“Why,” she said afterwards, as he held her trembling gently in his arms, “why does your God deny you this?”

Am I wrong? Of course not, because there is no absolute right and wrong when it comes to erotic writing. What rocks my world doesn’t necessarily do it for the next guy or girl. What makes me laugh might make you reach between your legs; my taboo might be your fetish. If I’d known as a 20-something what I know now, I’d have been trying to date the English-major chicks who were intimately familiar with Delta of Venus, Lady Chatterly’s Lover and Fanny Hill, hoping to find just one who would read them aloud to me late at night, until she could no longer contain her desire. Because THAT’S a fantasy of mine, dammit, but it didn’t evolve as such until I imagined it at 40 or so. In my 20s, I confess, most of the women I dated were not what you’d call big readers.

This is the part where I request a volunteer from the audience, but please—you have to be genuinely turned on by Anaïs Nin. I can spot a fake in a heartbeat.

Other articles by Jeff Schult