Another Year, Another No Pants Subway Ride 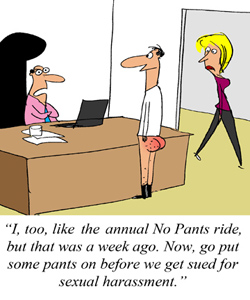 Brought to you by the folks of Improv Everywhere. We love you guys!
Not much about the subway could typically charm the pants off anybody, but a lot of subway riders charmed the world on Sunday when riders in cities from New York to Vancouver participated in the global No Pants Subway Ride. Usually, we’d think you’d get a ticket of some kind for wearing undies only on public transport. But on Sunday all anybody got was giggles.

The annual NPSR ride began, the New York Daily News says, in 2001 by the group Improv Everywhere. Participants were meant to keep straight faces, chat and listen to music and basically act like they usually do (and evidently, not wearing pants means you can’t reach into your pockets and tip the wandering minstrels enhancing your ride).

Last year, 3,500 people participated in the No Pants ride in New York City alone. This year, 6,590 people of all ages RSVPed to the event’s Facebook page. A photo of a father and son waiting pantsless for a train was posted there as well.

“This event’s perfect for me. I hate pants,” Michelle Chan told the Toronto Star, which detailed the joy with which riders took to the city’s new trains and stripped down to the giggles (and a few scowls) of fellow passengers and reminders by the conductor to “stay warm.”

Makes us wish we had a train just so we could lose our pants on it.