Mr. Lee, who typed up the letter in a very professional Papyrus font, comes representing his “friends at PETA,” and states that “Even during my wildest days with Motley Crue, I never could’ve imagined something so sick and twisted.”

Sea World has responded to Tommy Lee’s letter by saying the allegations are “beyond ludicrous,” while staff members quietly stuffed the special bovine Fleshlight under a pile of stray wetsuits. Don’t worry, Sea World; we won’t tell anybody. 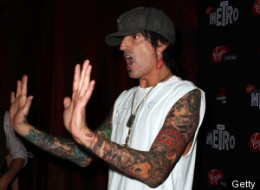