She Plays, He Plays: The Battle of the Tianis 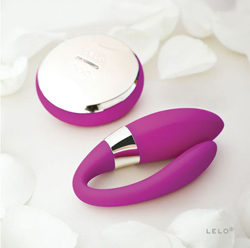 You may recall our last go ’round with a LELO Tiani. I obsessed over the instruction manual and Susan ended up hijacking the tight-horseshoe-shaped toy (not to mention my column) and putting it to pleasurable use as an understated double penetration device.
In between, we did manage to operate the Tiani how the designers intended: as a couples’ massager, worn by the woman during sex to provide hands-free clitoral vibrations.

“And don’t forget about the impromptu vibrating panties,” Susan says. Indeed, Susan also wore the Tiani one afternoon while we ran a couple errands. I kept the remote control in my pocket. “Those were fun errands,” Susan adds.

Anyway, our final analysis was that the Tiani was a pretty fantastic multi-function sex tool. I’m happy to report that the Tiani 2, with a few key improvements, is even more versatile than the original.

For those already familiar with the Tiani, you’ll be glad to learn that the remote control is still equipped with the very cool SenseMotion technology. If you haven’t experienced LELO’s SenseMotion in action, here’s the gist: the toy responds to the movement of the remote control. For example, in mode one, when you hold the circular remote flat, the Tiani 2 buzzes at about 10 percent power. As you rotate the control upward, the power gradually increases until it reaches full strength when the mechanism is vertical. In mode two, performing figure eights, shaking the controller, and so on creates different vibrating patterns and intensities. There also are a number of pre-programmed settings — pulsating arrangements, staccatos, crescendos, etc. — for which no SenseMotion is required.

Just as the remote control hasn’t been modified (though, LELO says it does have better range now, which adds to the fun), it’s impossible to visually tell the difference between the original Tiani and the newer model. According to Susan, that’s a good thing. “I loved the size and shape of the first one,” she says. “It was all about the vibrations. I’m glad they didn’t mess with that.”

Size and shape appreciation, however, is very subjective, so one of the updates is that the Tiani 2 comes standard with both the regular non-vibrating arm as well as an additional piece known as the “full-feeling attachment” that is supposed to provide more concentrated g-spot pressure.

“I don’t know if it gets my g-spot any better,” Susan says, “but it is amazing how much difference there is once they’re inside. The original is more streamline and the new one is flatter on the back with a pronounced bulge on the inside, but when you’re holding them in your hand it’s not like you’d say, ‘Shit, this one is way bigger.’ When I tried it, though, I knew right away why they call it the ‘full-feeling attachment.’”

I could tell the difference, too. With the original, we rarely use any lubrication and I haven’t had any discomfort stemming from my cock rubbing against the silicone toy. Figuring the new arm would just be a little more of the same (get it?), we didn’t even think about lubing it up the first time. The result was that “Rydell could hardly get inside me,” Susan says.

Which is flattering, but I think it had more to do with the shape. The flat side has a bit of a channel that runs down the middle, ostensibly to better accommodate one’s penis. Without lubrication, the simple geometry of the two shapes (a hard cylinder and a concave plane) vying for space inside the box just didn’t work out. Every time I entered Susan, the Tiani 2 would slip to the side of my shaft because that’s where the channel of the arm fit best. But don’t fret. A couple dabs of lube and all the pieces were completely compatible.

“And it is a very nice, full feeling,” Susan adds. “Especially from behind.”

Still, the Tiani 2’s greatest asset is the autonomous vibrating. “It really is about as close to truly hands free as I’ve experienced,” Susan says. “Once you slip it in it feels like it sort of clamps down between your upper vaginal wall and clit. Just that sensation gets me going. Add the vibrations, and … well, you get the idea.”

The only downside of the original Tiani is that those vibrations had to be triggered by the remote control. “Sometimes I just want to turn it on and let it work while my hands — and Rydell’s — are elsewhere,” Susan explains. “I don’t always want to be messing with the remote.” This shortcoming was taken care of with the update. Simply turn on the Tiani 2, push the single button again and away it goes — at full throttle.

Enjoy 15% off the LELO Tiani 2 by using coupon code SEXISTOYS at checkout!