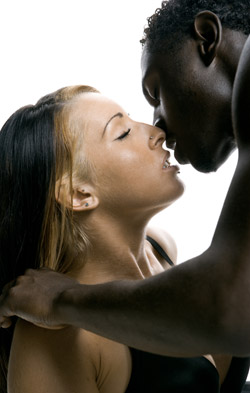 If there’s anything that can rival the intoxication of nude bodies grinding together in a rush of passion, it’s bodies that were so wild with desire they didn’t have time to get nude.
Clothes-on sex is hot and not just ’cuz you’re dressed: It means the passion was so intense, you only had time to get the bare minimum (panties) all the way off. It’s eons of primal sex blowing away our reedy few centuries of civility, head down, blinders on, going straight for the zipper.

“I get heat that rises from between my thighs up into my heart, which really does flutter,” says Leah, a musician, describing the tingle. “Then, it’s like an adrenaline high. It’s such a visceral experience.”

What she calls her “chemical romance” has lead to “a hot session in the airport Hilton women’s bathroom, (VERY clean, by the way), a highway rest-stop quickie, and a cosmic fuck that only two teenagers could have in a condo about to be sold. “We almost got busted by the real estate lady and potential buyers,” she laughs.

“I love when my reason and intellect fly out of my head. It’s such a relief, such a high. I guess being hot, hot, hot makes me feel very alive.”

A Florida gentlemen who asks to be referred to only as “Joe Francis” (no he’s not that Joe Francis) says that while he usually likes planning sex out one of his best surprises happened when he me an “incredibly hot” traveler at a local gay resort.

“We had great conversation, danced, made out, and he even persuaded me to strip down to my boxer briefs for the evening—as he had already dropped trou to his tighty whiteys,” Joe Francis recalls.

“I ended up coaxing him behind a rather large oak tree where we proceeded to make out with more, I felt him up, and eventually blew him. It didn’t take long before he gave up the spunk... and we ended up spending a few nights together while he was here, all filled with that same gotta-have-it passion.”

A Taste of the Naked Reader

A Passion for Frenzy

Out-of-control passions are the subject of Frenzy: 60 Stories of Sudden Sex, edited by Alison Tyler, the fourth such collection she’s done for Cleis Press. Authors like Tyler herself, Alecia Langley, Rachel Kramer Bussell and Jeremy Edwards burn through the pages with stories that skip the appetizers and get right to the main fare.

Joey Juschka’s “Language,” about how surprisingly little you’ll need your high-school German to go around the world is a mere half-page, put a packed one. As for Helena Black’s “Once upon a time,” a story about storytelling, well… if I say that by the second page I had to take a 20-minute break and be alone does that tell you all you need to know?


Certainly we’ve all been knocked over by waves of lust and managed to hold our impulses back until we were able to get our target to a private space. So what happens on those occasions when our chemicals commandeer the vehicle, in this case, our bodies?

“The short answer is that sex makes you stupid,” laughs Sheri Winston, sex therapist, educator, former midwife and author of Women’s Anatomy of Arousal: Secret Maps to Buried Pleasure, (Mango Garden Press, 2010) which won the Book of the Year award from AASECT (American Association of Sex Educators, Counselors and Therapists).

“It turns off the thinking part of our brain. It has to. If you’re thinking about what’s going on you’re not having great sex. The brain is very complex, so it isn’t just this one part but the neo cortex, ‘the executive office’ part of our brain which does “the judging, planning, evaluating, discussing negotiating part”—that’s “offline when the arousal circuit takes over,” Winston says.

The arousal process is the same physiologically, whether it happens slowly or quickly, Winston says, but what’s going to bring that urgency on is a combination of different loops we get into when we’re in those juicy new relationships. “The novelty/newness loop, the attraction/desire loop, the falling in love loop—when all those things happen, it’s pretty overwhelming, and when you get all those things happen simultaneously then you get knocked on your butt.”

Women are actually more susceptible when they’re ovulating, Winston points out, despite the fact that, as humans, we can be in heat any time—not just when we’re fertile. “We think ovulation is hidden,” she explains,” but there are signals, the smells, the pheromones are still happening (i.e. this New York Times story reporting that strippers who are ovulating get better tips.), and people pick up on that.”

There is one drawback to sudden sex, of course. Sometimes, you have to pay the piper. We’ve all had those mornings after when we wake up thinking, I can’t believe I did that!

“Arousal overriding common sense may good for ‘good sex,’” Winston warns, “but it’s not so good for negotiating boundaries and safer sex, and some of the things that are more challenging for some people.

“ ‘Oh, I couldn’t help it. I was swept away,’ is the usual excuse for bad behavior, behavior outside of integrity, or not using condoms” says Winston, “and I understand that because it is so powerful because it’s designed to be powerful—otherwise we wouldn’t reproduce.”

The arousal and gratification feel so fabulous … Who wouldn’t want to just let go? “You’re getting all these feel-good chemicals,” Winston explains. “The endorphins are a natural opiate. You’re getting oxytocin, the love hormone and also the orgasm hormone and the falling in love hormone, PEA (phenylethylalanine). So [there’s] this whole love/lust soup going on, and we can have that happening even if we’re past our fertile years,” or when we’re not ovulating, though that urgency will likely decline as a longer-term relationship.

“So you when you have those moments when you simply can’t make it from the car into the house without tearing each other’s clothes off (and hopefully not hitting the horn and waking the dog and the neighbors) you have your chemistry and primal, biological imperatives to thank for it—and they should get some high praise, maybe even a nice gift basket. After all, one good, ‘Wham bam, thank you, Ma’am, deserves another.’”