The Naked Reader Book Club: Eat and Be Eaten 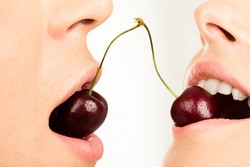 For a sexual position that so majestically mirrors the harmonious Yin-Yang, the 69 sure stirs discord between the sexes.
I’ve never entirely been sold on the whole Mars-Venus thing. Now admittedly, if life were a Seinfeld episode, I’d be an Elaine. My dancing prowess notwithstanding, I’ve always been something of a guy’s girl. I quote Monty Python, scarf gigantic char-grilled steaks and enjoy hanging around the house watching basketball in my underwear. Sometimes all it takes to make me snicker is the word “balls.”

That being said, I’m still a chick. And I’ve found that if one uses my pool of respondents as a legitimate cross-section, then Dr. John Gray missed a vast and glaring divide between the genders that, in my “guy’s girl” mind, is as compelling as anything else in his world-famous bestseller. Actually, probably more.

Martians dig the 69. Big time. Venetians? Not nearly as much.

A Taste of the Naked Reader

There are a couple of options for this favorite: him on top; on hands and knees over you; you on top (same thing reversed); or both of you on your sides, which may be the most comfortable of the three. Experiment with this one to see what you both like. In fact, you should experiment with all ofethese positions over and over…

What He Can Do When You’re in the 69 Position:

• Give you head, of course.
• Spank you.
• Penetrate you vaginally or anally with his fingers or a sex toy.
• Nothing, if he’s tied up.


I am an exceedingly oral person. It took an astounding number of TicTacs and probably a collective half-gallon of explosive ink ingestion to break my pen-sucking habit. And I still rather sophomorically enjoy drinking a top-shelf vodka rocks through the delicate siphon of a plastic stirrer. Not surprisingly, my enthusiasm for oral sex cuts both ways. I have all the makings of a fervent 69er. And yet … I’m really not.

It’s not that I don’t enjoy it. I can and do. In fact, my first orgasm (non-self-induced, that is) occurred while I was crunching this most infamous of numbers. I was tipsy, barely legal and perched atop a very precarious makeshift bunk bed—and, of course, Brad’s face. And I saw freaking stars. But even so, I usually prefer my oral à la carte. And I found, upon survey, that my predilection falls squarely in the girly column.

“I dunno…” puzzled Remi, 40 and married, struggling to find precisely the right words. “It’s just … too much ass-in-the-face.”

What might confound the boys reading this is that her concerns were not about a man’s rear end all up in her grill, but the other way around. In fact, virtually every woman I queried on this topic echoed this sentiment in varying degrees. Clearly, despite several decades of girl-power karma flowing into the ozone, a good many of us still have body-image issues.

“I mean, do I really want anyone having a microscopic view of my inability to shave my bikini line without a few stragglers? Not to mention possible butt acne? Eww!” chimed Char, 38 and single.

The irony of this, of course, is that too much ass (not to mention everything else) in the face is precisely what each of the men I spoke to—gay and straight—revere about the 69.

“In a more traditional, missionary-style approach to oral, you control the intensity of the pressure, the starts, stops and such,” says Jay, 38. “During 69, the woman is generally on your chest. She can grind her parts into your face, your chin, your forehead—whatever makes it right for her.” Jay adores this aspect. “I like to use as much of me as possible,” he laughs. “Plus the lack of control means there are times when you’re practically being suffocated by a wet vagina.”

But men are not immune to feelings of anxiety. Damien, now past 40, was a young gay buck in the ’80s – albeit inexperienced. His pre-date worries ranged from whether he would get some to whether his chops would be up to the task.

“I started sweating from nerves [once the action started]! My world was rocked and panicky at the same time. I’m thinking about how great everything feels, but I’m also paranoid that I’m going to fart or something. I’m loving it, but I’m worried whether I’m good enough.”

These days he falls right in line with his straight brothers. “Once I dropped my head over the edge of the bed and our mouths went to each other’s cocks, my tongue slipped to rim him, the blood was flowing to my head and my whole body was tingling, I knew for sure that 69 was—and always would be—my favorite position ever!”

Samantha’s husband “looooooooves” the 69. “Me, not so much,” she says.

Mostly this boils down to logistics. “He’s 6’4”, I’m 5’4”, and for some reason, I can feel his teeth on my clit… Blech!” And then, there’s his penis. “It has a slight inclination that’s not aiming in a helpful direction for my mouth,” she laughs. “I do it occasionally, just for him.”

She admits it is difficult for her to achieve orgasm, anyway. “I need all my focus on my own enjoyment. I guess I’m a poor sexual multi-tasker.”

Char, for all her worry about errant pube stubble, was an avid 69er in her adolescence. These days her ideology isn’t far from Samantha’s. “I can’t give a mind-blowing BJ while trying to enjoy the pleasure of oral [being performed] on me,” she says.

Conventional wisdom seems to say that the woman-on-top position is traditional for hetero 69ing. Jimmy says he’ll take whichever he can get, “but there’s something extra special about the man-on-top position,” he says, adding that it “doesn’t fly well” if the woman has a sensitive gag reflex or “if you have an inconsiderate man who just thrusts away without regard that he’s in someone’s mouth.

“But,” he says, “when fates allow, something about the position drives me crazy. Probably because I think a woman who would do that must be wild, daring and kinky.”

Back in his 20s, Jay went to a family event and hooked up with a friend of his cousin’s. “We’d been drinking and by the time we made it to her apartment, we were clawing and grasping at one another—not just trying to remove clothes, but to keep from falling over.”

Later, as she positioned herself on top of him for a 69, he felt near to passing out. “I gave everything I could, though,” he laughs, “and didn’t get why I couldn’t get this girl off when I’d already finished with ease.”

That morning she informed him that he’d administered a very spirited rim job something new for her that she’d quite liked. “I was embarrassed for about two seconds and then I thought, Fuck it, everyone eats a little ass once in awhile.”

It's the Pussy, Stupid

Dave, now 40, lucked into his first 69 roughly 20 years ago when his date showed up at his house (his folks were out) with vodka, Sprite and a deck of cards. “We played Rummy 500 until both bottles were pretty much empty,” he says. Soon after, the clothes began coming off and at some point, the 69 began.

“It was fantastic,” he says, still enthralled by the memory. “I’m drunk, I’m being blown, I’m smothered in pussy. Life is great.”
Yup. That about sums it up.

I set out to pen a piece about 69 and it turned into something of a call to arms to eradicate this profusion of preconceived notions about what the average Martian concerns himself with when it comes to synchronized oral. It’s not your huge ass (which he could well love) or a few days’ razor neglect. The final answer falls somewhere between jack and squat.

Why? Because there’s a vagina on his face and a mouth on his penis.

It really is that simple.