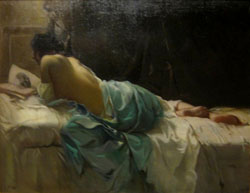 From censored to celebrated, erotica emerges from its dark alley and brown-paper-wrapper past to stake its claim on the bookshelves along with classic literature of every genre.

The 21st Century and the New Millennium

By the 20th Century, the kinks might have been different than those in bygone times, but they were no less kinky. Vladimir Nabokov’s watershed novel, Lolita—the 1955 tale pedophilic Humbert Humbert and his quest to keep his 12-year-old object of obsession in his life by marrying the girl’s mother—was, and continues to be in some circles, considered scandalous. Nabokov himself was so freaked out by his own manuscript, he nearly burnt it. He didn’t have to worry. It was banned in a number of countries anyway.

Felice Newman, publisher and co-founder of Cleis Press, points out that it was Barney Rosset of Grove Press who took the plunge against book-banning and censorship when by publishing the full text of D.H. Lawrence’s Lady Chatterly’s Lover for the first time in 1959—31 years after it’s original 1928 publishing date. “He was quite the hero,” Newman says, “He published D.H. Lawrence and it was banned as pornography. It was a big, courageous thing.”

Copies of the book were confiscated by the U.S. Post Office. In an ensuing lawsuit, it was decided that the material was not obscene. Grove didn’t stop there. They also published a full text of Henry Miller’s Tropic of Cancer, which also caused a firestorm and, in 1973, prompted the U.S. Supreme Court to invoke a new standard, The Miller Test, for deciding whether a work could be banned (a test which is still used to define censorship standards today).

Miller’s Rosy Crucifixtion trilogy, Sexus, Plexus and Nexus would be published in 1949, and while he enjoyed great acclaim, his lover and colleague, the hugely influential Anaïs Nin, would have a little more trouble getting her star to shine across the seas.

Nin and Miller both began writing erotica for $1 a page, but she had more trouble finding a publisher in America (though she had done well in Europe) and eventually resorted to buying her own printing press to get her work out.

What’s Saucy for the Goose…

With a great deal male-oriented sexual imagery having migrated to other mediums like magazines and adult film by the ’60s and ’70s and sexually revolutionized women taking more ownership of their sexuality, it was natural for more female-written and oriented work to begin to dominate erotica. Erica Jong lead the way in 1973 with the enormously popular Fear of Flying, which introduced the world to the phrase “zipless fuck.” Anne Rice’s hugely influential BDSM Sleeping Beauty novels (1983-85), written under the name A. N. Roquelaure, and Susie Bright’s groundbreaking Herotica, a collection of erotica fiction written by and for women sealed the deal of three decades in 1993.

“I’m a big fan of the early Herotica collections, and still reread those and remember vividly some of the stories I read long ago,” says Kramer Bussel, who, at the time of this writing, was reading Anaïs Nin’s Spy in the House of Love.

Also looming large, in the late ’80s to be exact, was Macho Sluts, by Pat Califia (now Patrick Califia-Rice), a collection of inventive, shocking, funny, sado-masochistic lesbian short stories, which sounds like another afternoon on Springer now, but was mind-blowing in 1988.

The mix of authenticity—the honest desire for sex—mixed with the art of presentation, wit and craftsmanship is what erotica is all about, and in the 21st Century, it’s moving forward with ebook and hard copy (pun fully intended) companies such as Ellora’s Cave, (whose sales, according to Digital Book World, went from $43,000 a decade ago to more than a projected $5+ million), and and smaller contenders like Wild Rose Press, which goes from sweet to steamy (and whose list of subgenres intriguingly includes "time travel"). Even the standard-bearers of the bodice-ripper, Harlequin Romance, has expanded into a heated line called Spice.

For Cleis Press, with new works by Califia, Bussel and prolific author author, editor, and bon-vivacious blogger, Alison Tyler, the ’90 s was a golden age but the new work shines just as well. “We started with Best Lesbian and Best Gay Erotica, in the ’90s,” Newman says. “Prior to that most erotica was little, smutty, poorly edited dime store kinds of books.” Not that erotica shouldn’t be explicit, Newman says, it should.

But just as many other facets of the adult industry have matured (i.e. vibrators becoming beautifully designed and sold in more mainstream locales), Cleis has helped mature, diversify and celebrate the genre.

“(Erotica) can be can be just so unflinchingly sexual and use all of the language that people use in speaking about sexuality, and it can be well-written and edited and packaged and have a beautiful cover and be sold in trade bookstores. That’s what we’re doing. The change we made is that you could have it all in one book…it could excite you in an intellectual and aesthetic way, and be very explicit and excite you sexually as well.”