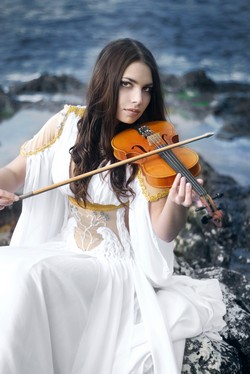 Is there more to your moans and groans than you thought? Let's see what the science says about sounds and sex.
Female copulatory vocalizations: what the heck is that? It’s really just a fancy word for...moaning, groaning, screaming, and the rest. This is how scientists refer to the sounds females make (human and non-human) when engaging in sexual activity. Yes, biologists will go into the field and record the sounds a female primate makes during sex. They’ll also survey and record couples in the act for the pursuit of science. Why is that?

There are a couple of theories proposed to one of life’s most intriguing questions: why are females, on average, the more vocal gender during sex? Some propose this is a relatively new phenomenon due to culture and is not a part of any biological wiring. It could have some substance. It’s pretty common knowledge that some women will...embellish on their sounds during sex.

Some scientists say otherwise. Vocalizations (which are referred to as FCV) have been documented in baboons. Female baboons tend to be louder and more vocal when they are closer to ovulation and when they are mating with male baboons. It is thought that the FCVs are a way for the female to announce that she is fertile and inviting other males to mate. Baboons are polygamous, and thus mate with multiple partners. The FCV could be inviting sperm competition; only the best sperm will survive to provide the healthiest possible offspring.

This behavior is also risky since it also alerts potential predators to the baboon's presence. The benefits have to outweigh the dangers in some way, even if we’re not sure, since this behavior has been around for a long time.

So we have baboons. That’s all well and good. What about humans, though? Believe it or not, scientists have been able to recruit both women and couples to study the phenomenon of FCV. It seems to be a bit of a chicken and egg problem. What came first? It has been studied that human FCVs approach a peak when their male partner approaches orgasm. Is this because the female is excited that the male is going to orgasm? Or is it because FCVs aid men in achieving orgasm faster?

By surveying a group of men, it’s been shown that a statistically significant amount find their partner’s honest FCVs arousing. Again, though, we struggle to figure out if men like it because of culture or biological design.

Studies are helping to illuminate some theories while turning away from others. It was thought that FCVs were indicative of orgasm, so indicative that the sound almost automatically comes from impending orgasm. The International Academy of Sex Research was able to sample a group of sexually active women. They were placed together to get graphic details about their sexual experience. Then these conversations were recorded. Besides the scientists learning that women could be quite...detailed in their discussions, they learned some other interesting things.

While women orgasm in multiple ways, that is not when they are the loudest. The women admitted to orgasm through manual stimulation, foreplay, oral stimulation, and the like. However, they were the loudest before and when their partner was ejaculating. In fact, women will make sounds even if they do not experience orgasm. In a follow up questionnaire, women gave their personal reasons for using vocalizations. The reasons ranged from turned on and wanting to excite their partner to being bored and tired. Most women realized the power the noises had and used them to help control the timing of intercourse.

This has put a bit of a hole through the “women announcing their orgasm” theory and has bolstered the “announcing to other males” and “aiding male ejaculation” theories. It has also been used to strengthen the theory that humans are more polygamous than culture dictates given how our response parallels polygamous primates.

Who would have thought that the moans and groans of sex are so thoroughly studied? We might not find out the true cause of why humans, females in particular, make noise during sex (other than breathing from an accelerated heart rate). What we can do, though, is aid in the pursuit of science and give scientists more data points to study.