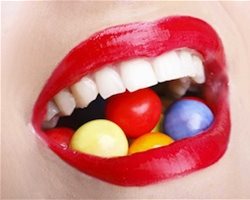 http://www.bubblews.com/assets/images/news/141117164_1361110181.jpg
Oral Compulsion is defined as the habitual insertion of foreign objects into the mouth for reasons other than feeding. Thumbs, toys, fingernails...and yes, other things as well. But let's look at the wider picture first, and if you ever bit the head off your Ken doll, then you'll probably know what I mean.

Chewing Your Way Through Childhood

I was always a very oral child. Mom has told me how she and my father used to despair, convinced that I was permanently walking around one minute away from choking on the latest whatever I had popped into my mouth. I sucked my thumb, I chewed my pencils, I bit my nails, I gnawed on my dolls. I am not going to say that if it was long and thin, I had to have it in my mouth - so far as I was concerned, I had standards, and if something tasted nasty or didn’t feel right, I would never try it again. But you have to try it once, just to find out, right?

My first visit to an emergency room, apparently, was for something I swallowed. My first major childhood trauma was when I discovered I’d chewed Barbie’s hand off. My parents were non-smokers, but I couldn’t wait for the chance to find out if I was, and I developed an early fascination for the books and films of Sherlock Holmes, simply because I admired his pipe.

My first romantic dreams and imaginings invariably involved a soft hand on my face, firm fingers on my lips, and my tongue and teeth exploring them...and yes, as I got older and heard about other things, there was one that went straight to the top of the to do list. Where it remains to this day, long after most of my other childhood chew toys have been forgotten, or even induce frowns of disapproval from me. I am very selective about what I put in my mouth.

Yet all of this, according to the most commonly held definitions, places me firmly in the ranks of the world’s oral compulsives. Good news for my boyfriend, bad news for whatever smoking cessation therapy my doctor will be recommending next time I see him. I still chew pens, but I gave up chewing gum when they started to stuff it with artificial sweeteners. I occasionally bite my nails, but I no longer snack on doll parts. And my dentist, who I’ve been seeing since childhood, no longer lectures me on the subjects that I think I once knew by heart and which, apparently, are all ranked high among the primary symptoms of an oral compulsion (or fixation - the terms are interchangeable, although the latter has fallen from fashion lately).

Sucking my thumbs. It can knock everything out of alignment.

Lip biting or sucking. Apparently it can shift the upper teeth out of position. Or the lower ones, if you enjoy extending your bottom jaw and latching teeth onto your top lip.

Tongue thrusting - that is, swallowing food and drink with the tongue at your teeth, rather than the top of your mouth. It’s how babies swallow before they get teeth, and you’re meant to stop when they first poke through. Oral compulsives, apparently, don’t.

Ah. He’s stopped lecturing me, but have I stopped doing them? Thumb sucking, yes. I stopped that when I discovered nail biting. Tongue thrusting, yes. I think. Lip biting...sometimes when I’m thinking, especially when I’m writing, I catch myself having a quick gnaw. But that’s not a compulsion, that’s just a way of concentrating, right?

Which is usually my response when I wonder why I do any of this stuff. As a child, we are told thumb sucking is a form of self-comforting, which is fair enough. The world is big and scary and it gets bigger and scarier with every passing day, as your eyes and mind widen to all that is out there. Psychiatry suggests that the thumb becomes a surrogate for the mother’s nipple (or however else you were fed as an infant), and that makes sense.

Later, it could just be curiosity - this is pretty, is it edible? Or boredom. Or nervousness. Or any of the myriad other things that go through a child’s mind and dictate its behavior, that we lose touch with as we age. But it could also be because it feels good to have something in your mouth. It’s relaxing. It’s enjoyable. And yes, it helps me concentrate.

To be honest, I think a lot of this compulsion/disorder/syndrome stuff is nonsense, a modern need to explain away every single idiosyncrasy that a person might have, to neatly file it away in a box. Which, of course, is a leading symptom of an obsessive/compulsive disorder! Somewhere, someone is currently developing a treatment to help you break the habit of putting your left shoe on first every morning. As if it matters to anyone apart from a pharmaceutical industry that has discovered that if you attach the word “disorder” to a perfectly normal habit, you can probably market a drug to cure it.

Sex and the Oral Obsessive

But oral compulsions are one of the few that I believe do have a grounding in reality, if only because there is a range of marked, common and universal “symptoms” (which is not a word I use comfortably, by the way). And because a few of them, namely the danger of choking and the orthodontic damage, can have effects that spread beyond the compulsion itself.

Excessive snacking (another sign) has its drawbacks of course, and I guess there’s always the danger of putting something in your mouth that by its own nature can lead to complications; back in the days when toy soldiers were made of lead, poisoning was common among children who would habitually pop the little guy in for a nibble.

It can also color your reputation during those early years of sexual discovery. But I want to save that thought for a future article.

Okay, we will pause for a moment there; I want you to do something. Hop over to a search engine and type in “oral compulsion," bearing in mind that we are discussing a known and recognized medical (or at least psychological) condition.

What do you get? A bunch of humorous videos. A couple of pages of jokes. And, sneaking in completely under the radar (assuming you don’t have any filters set), porn. Or at least sexual content. “My girl has an oral compulsion - she won’t stop sucking my dick.” I leafed through three pages of hits and found just one article that actually referenced the subject as anything more than the butt of a joke or the source of a fantasy, and even it wandered off into some horrifying discussion of Klüver-Bucy syndrome, a disease first isolated in monkeys which compelled them to explore their surroundings orally. Which, in humans, can be a side effect of herpes simplex.

Do those non-smokers (and those smokers, for that matter) exhibit other signs of oral compulsion, though? That is a question that I have never been asked, never seen answered, and never found broached in any survey. Even in my own case, as my teenaged fantasies drifted from biting his fingers to sucking his cock, I would never have considered that a part of any compulsion that I may or may not have, simply because my motives were, and are, completely different.

When I chew a pen, as I said before, it is to help me concentrate on something else. When I go down on my boyfriend, that is the only thing I’m concentrating on, and I have never once thrown his cock across the room with a triumphant cry of “got it,” then typed fever pitch for the next twenty minutes, without even breaking to bite my lip.

Likewise, I smoke because I enjoy it (and yes, because I’m addicted to a filthy habit that will probably kill me in the end), and while it is an aid to concentration, it is also a way of relaxing. I tend not to smoke in the house, because I don’t want my cats developing bad habits, and stepping outside for a puff gives me a chance to clear my head.

And I blow my boyfriend whenever I can, because we’re in love and we love it.

My head says yes, if I put my mind to it. But it also asks why I would bother. Maybe I have an oral compulsion and maybe I don’t. But beyond the frankly disturbing possibility that I am now a psychological statistic to be tabulated by whichever marketing department decides to market a “cure” for my “disorder,” what difference does it really make?

“My name’s Jenny and I’m an oral compulsive. Now shut up and pass me that Barbie.”
Tags:
Views: 2372
Related articles