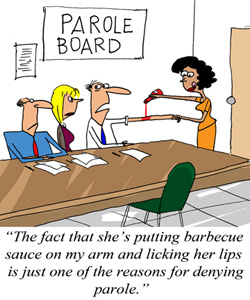 Yes, we said “cannibal murderer model.” You read that correctly.
Cannibal Model Wants Out! Sounds like a great Halloween movie, but it’s true. The Los Angeles Times reported Wednesday that Omaima Nelson, who was sentenced to 25 years to life in 1993 for killing— and cooking and eating (or at least tasting)—her husband, wanted out on parole.

Yesterday, the AP reports, after a five-and-a-half hour hearing at which Nelson said she was a changed person and “wanted to live the life God meant,” her parole bid was denied. She won’t be eligible for another 15 years.

The Egyptian-born former model and nanny was 23 and her husband William was 56 when she killed him, she still claims, in self defense. An earlier AP story said Nelson’s original defense attorney “argued that his client was circumcised as a child growing up in a squalid section of Cairo, which made sex extremely painful, and was repeatedly raped and abused by her husband in the weeks after the couple wed.”

But prosecutors found evidence the murder was for financial gain, the AP reported yesterday.

Nelson “decapitated, dismembered and disemboweled the body over the course of the Thanksgiving weekend, churning his parts through a garbage disposal that neighbors said ran nonstop in the hours after the murder,” the story said. The victim’s hands were found “friend in oil” and his head, boiled, in the freezer.

The psychiatrist at her original trial “testified that she confessed to cooking her husband's ribs barbecue-style and tasting them but later denied engaging in cannibalism.”
Tags:
Views: 984