Dr. Pepper Gets All Macho with New Diet Soda 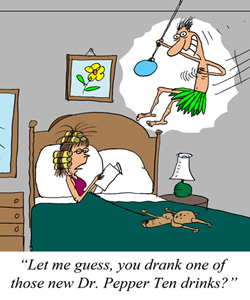 We get the joke, but we're not sure it's the same joke they think it is.
Have you ever made fun of a man for drinking diet soda? Probably not, since you’re not a ten-year-old from the 60s when Tab was still new. Nonetheless, Dr. Pepper is coming out with Dr. Pepper Ten, a ten-calorie, uber-macho drink in a gunmetal gray can. The campaign asserts “It’s not for women,” the AP says.

Dr. Pepper says that men are dissatisfied with the image of diet drinks.

Jim Trebilcock, executive vice president of marketing for the company, isn’t worried about women getting offended— they weren’t in six test markets in the U.S and 40 percent of the people who have tried it were women. They get the joke, he says. Still, it seems odd to want to potentially put off half of adult consumers. Yorkie, a UK chocolate bar, once promised “It’s not for girls,” but that seemed playful, designed to goad a girl into wanting it (though some found it sexist). “It’s not for women,” just sounds a little … douchy.

The proof will be in the taste, of course. If Dr. Pepper Ten is good, anyone who wants a low-calorie soda will drink it. In the meantime we can look forward to the “Dr. Pepper Facebook page for men only. And TV commercials are heavy on the machismo, including one spot that shows muscular men in the jungle battling snakes and bad guys and appear to shoot lasers at each other.”

Is it just us or does that sound really gay?
Tags:
Views: 986