Catholic Church, Turns Out, is a Big Seller of Erotica 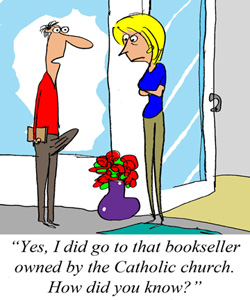 We imagine they'll have to say a few “Hail Marys.” Or something.
The sad thing is, we’re not really all that surprised. The Independent revealed on Saturday that Germany’s largest bookseller (after Amazon), Weltbild, has been selling pornographic novels. And that it’s owned by the Catholic church.

The company “has been selling thousands of pornographic novels with titles such as Sluts Boarding School and Lawyer's Whore with the full assent of the country's leading bishops.”