The End of an Era: Saying Goodbye to a Safe Haven of the AIDS Crisis Era, The Starlite 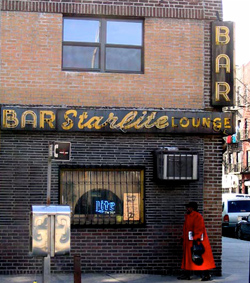 The Starlite Lounge, founded in 1959, was Brooklyn’s oldest gay bar and the first black owned gay bar in the city. It was more than a gay bar; it was more than a neighborhood safe haven; it was both and so much more to those who gathered on World AIDS Day to remember the times they shared.
Lady Jasmine was once resident drag queen of Brooklyn’s infamous (and now closed) Starlite Lounge. In person, Lady Jasmine is impossibly tall and strong-bodied. Her eyes are rimmed with heavy lashes and purple eye-shadow and she is coiffed Jennifer Hudson-esque. Tonight, Lady Jasmine is watching herself on the big screen, in a documentary viewing. The Lady Jasmine on screen wears a glittery black floor length gown and writhes on the floor in a passionate lip sync.

But as she crawls on the dance floor, something larger inside of her seems to give way. Lady Jasmine’s shoulders fall and she begins heaving. She is still lip-syncing but toward the end of the song she is in the middle of the dancefloor, in a ball. The audience, all around her, reaches out their hands to help her up.

Starlite: We Came to Sweat (still in production) is being shown for World AIDS Day in a small bright room of New York City’s LGBTQ center. The room is packed — full of the Brooklynites from Crown Heights who remember the Starlite. There are the long-time locals — gay people of color and Crown Height’s newer residents: hip, white and also queer. Before the screening someone asks: “How many people here have been to the Starlite?” And most of the audience raises their hands.

Trailer for STARLITE from sasha wortzel on Vimeo.

The documentary is about the Starlite Lounge founded in 1959, Brooklyn’s oldest gay bar and the first black owned gay bar in the city. The Starlite long pre-dates New York City’s massive LGBTQ center, where we sit to watch the documentary. Starlite was sanctioned as an official “safe space” in mid Brooklyn for queer people. But after the building acquired new owners and as Brooklyn became more and more gentrified, this institution has been forced to close.

In the documentary, the Stonewall-era regulars of the bar are interviewed, “So for black gay people, you had Fantasies in Harlem and you had the ballroom scene. But Starlite was a black bar and black owned!” During the discussion after the screening, the former owner of the Starlite explains this was during segregation, when people of color couldn’t even have a drink in most establishments. After the film, I hear that Starlite was the only place past Atlantic Ave — in Brooklyn — that black people could come in and get a drink at all. Someone mentions the black folks that came from Harlem, pulling up in the cars, wearing furs, happy to find a new place to party. The Starlite was a gay bar, but it was also a neighborhood bar, open to anyone. The Starlite served as a very early a bridge between gays and straight allies — before the gay-rights movement really took off.

Years later, during the AIDS crisis, Starlite became a safe haven. While many gay establishments closed their doors in New York City during this time — bathhouses, gay bars, gay theaters — Starlite became a rock for those dealing with the after-math of HIV. Perhaps because Starlite was so family-oriented. One of the patrons in the film tells of neighborhood people coming in after Little League games; how it just seemed everyone always ended up at the Starlite. There is a certain wholesome aspect about the Starlite.

But to understand how the bar is a safe space, one must also see that the bar is seated in what has long been known as a tough section of Brooklyn, on Nostrand and Berger Ave. One of Starlite’s devotees explains how she used to teach the kids in the neighborhood how to duck and roll during gun-fire, and recounts a day when, outside the Starlite, she heard gunshots and grabbed the kids playing in the street to pull them out of danger.

This element of danger in the community just made Starlite all the more needed; the bar became an official “safe space” thanks to the Audre Lorde Project’s S.O.S. anti violence campaign. According to the project’s website, The S.O.S. Collective “organizes and educates local businesses and community organizations on how to stop violence without relying on law enforcement.” In the neighborhood, homophobia runs through; a little over a year ago a man was stabbed nearby the Starlite, the murderer stated he had done so because the man was “flirting with him”.

A former bartender for Starlite explains, after the film, that it was his job to sober up drunk people before they left, to make sure people got into cabs. Patrons recounted that at Starlite, everyone was welcome. Everyone gets greeted with a hug. During a scene in which the long time black patrons rally against the closing, a white woman who is new to the neighborhood and has visited Starlite twice gets mic-time about why she wants this bar to stick around, just like everyone else.

It is this focus on being a safe space that also helped Starlite became a haven during the AIDS crisis. During the course of the film, the glittering Lady Jasmine comes out about her HIV positive status. We also learn that Starlite’s beloved long-time owner and DJ, Butch died of AIDS.

Patrons re-call entering and seeing Butch in the back — always playing new music. At the time the Starlite was playing a lot of house music, “house music’s heart and soul is gay people” the woman seated next to me said — “that is why house had such positive and uplifting lyrics. We needed that, as gay people, as gay black people. And especially during the AIDS crisis.”

With the back-drop of house music, there seemed to be a natural flow between New York’s ballroom community and the Starlite. Drag-balls are underground pageants in which (mostly black and gay) contestants vogue, “walk” and dance for trophies — most famously depicted in 1990’s Paris is Burning, but also celebrated today in pop-culture with shows like Rupaul’s Drag Race.

“This was gay Brooklyn in the 80s and 90s, of course there was a flow between the ballroom scene and the Starlite,” says the woman seated next to me. She also counters that this would have been before Paris is Burning. Before Madonna co-opted “voguing.” At the time those things seemed to mark the end of an era for those in the ballroom scene, but yet, as the balls taking place in New York every year highlight, the show keeps going on.

During that moment of the film where Lady Jasmine collapses mid-song, it’s unclear whether the graceful melt-down is because of her HIV positive status, or because of the imminent close of The Starlite. But either way, it is cathartic. The audience feels it.

And it is this sort of genuine display emotion that, during the discussion, Starlite patrons keep bringing up. The moderator summed this motion up: “Starlite was authentic, and I think that it what we felt and are all describing. When you walked in, people wanted to hear your story; they cared what you had to say. It was a different kind of social interaction. ”

It was touching, though somewhat bittersweet, that this rings true for the white people in the audience as well, as it is gentrification of the largely black neighborhood that the (white) film-makers partially blame in Starlite’s close.

The bartender describes his last night during the discussion. It was a karaoke night, always popular at Starlite. He locked up and walked down the street, but didn’t look back: “it was the end of an era.”
Tags:
Views: 1595