How AIDS Affected My Life 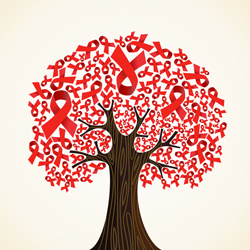 shutterstock, Cienpies Design
As a child to a parent with AIDS, I had a lot of challenges not normally faced in childhood. I learned to make the most of each day.
My mother was diagnosed with AIDS when I was in 6th grade. Only 11 years old. I remember the day she told us clearly. We lived with my father and she came to visit us at an unusual time. We already knew something was off. We were all sitting in the living room of our apartment, when she broke the news: she was sick and had AIDS.

At 11, I had heard the word but really had no idea what it meant. I knew that my 9 year old sister had to be even more confused than me. My mom explained it to us as a sickness in her body that killed off cells she needed to not get sick. Nothing after that day was the same. She told us that her doctors thought she contracted it seven years prior, and that it would never go away. We cried, but more because we realized our mom could die.

At that time, I didn't realize the stigma that came from being HIV+ or having AIDS. However, as I got older, I realized it wasn't something you could share with people. By high school, I understood it was something that you shouldn't talk about.

In 10th grade, when other students at my high school found out my mother had it, all hell broke loose. Everything from outright bullying and humiliation, to rumors I myself had it. People, who were previously my friends stopped talking to me. It was like they were afraid if they talked to me they would catch it, too. It was a hard year in high school. And it was even harder for me to think about what it must be like for my mother; to live with it every day and to know that anyone who found out would judge you before they even knew your story.

Dealing with my mother’s sickness was hard in other ways also. Constant bouts with bronchitis, pneumonia, thrush, and various other illnesses paired with reactions and side effects from various medications took a toll on my mother. Someone who was once so alive, and fun, and ready go out and explore with her children was gone. She was replaced with a shell of a woman who was sick and weak all the time. There were days when she couldn't even get out of bed. There were many times we worried about if she would still be there the next time we went to see her.

Over time as she found medications that worked for her, the side-effects lessened and the sicknesses became less frequent. Now, in my mid 20’s, I am not ashamed to say my mother has AIDS. I have tried to find ways to help others understand how it affects people, how it is spread, and how to deal with a loved one having it. I have seen and felt the hurt that comes with generalizing people with AIDS. One bad decision can affect the rest of your life, and you don’t know before it’s too late. We try to live grateful for the chance to experience a new day.
Tags:
Views: 1469