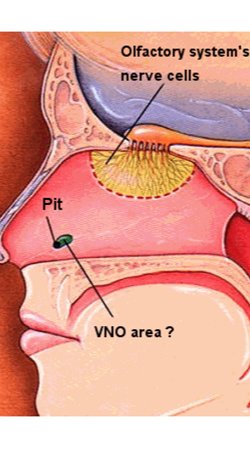 http://www.pheromoneadvisor.com/pheromone-articles/making-pheromones-work-for-you/
You're scanning through various massage oils and lotions here on Edenfantasys, and you see that word again. Pheromones. But what are they? What are they doing in your massage lotion? And most importantly, do they work?
What is a pheromone anyway?

A pheromone is basically a chemical that all animals produce, which creates a response in other animals of the same species. These responses vary greatly between species. The most documented use of pheromones has been with bees and other insects. There are more than ten different reasons an animal would secrete or excrete a pheromone, including aggression, warning, and sex. A bee uses pheromones to leave a trail that helps guide other bees to nectar.

So what does this have to do with your massage oil? Well, humans are animals. More exactly, Homo sapiens, a member of the primate species. We, like every other animal, create pheromones for various reasons. What is the one that is in your massage oil? Well that one is supposed to trigger the sex response. Ideally, you would rub that on your body, and all the other Homo sapiens will be clamoring to get a whiff. Humans pick up pheromones through our VNO, also known as the Jacobson’s organ, which is located between the nose and mouth. This organ is the first step in your sense of smell. So the idea is that if sexual attracting pheromones are added into your lotion or body oil, it can help you attract mates.

So why aren't I a sex magnet?

Unfortunately, pheromones are very hard to scientifically test in humans. The biggest problem is that everyone's scent and pheromones are different so it is nearly impossible to come up with a clean, completely non-smelling control subject. Not every pheromone reacts the same in every person. A pheromone, that has one person reacting incredibly sexually, can have the opposite effect on someone else. The effects of pheromones are subtle and may not be exactly what you are hoping for.

There are many people who avidly affirm the use of pheromones as a sexual attractant. Although there are plenty more who swear that they do not work, and some even that think they do not exist. My personal philosophy is why not try it out and see. If I happen to find the right one that sends my man over the edge that is great! If not, I got to try out a few fun body products in the process!

Where do I start?

There are many pheromone enhanced products these days. Edenfantasys offers a wide range of them, surely something that will fit every need. If you are into floral scents, my very favorite is the Body Dew Silky Body Oil in the Make Me Blush Scent. You can find my review HERE! It also comes in different scents if you do not like floral. For men, EF offers a few choices. I would recommend the Max Attract Hypnotic Sex Attractant Cologne. The most important thing to remember when using pheromones is to have fun and experiment. You will never know how something works for you, if you don’t give it a try!
Tags:
Views: 1468
Related articles