Letter from the Editor: Change in all things is sweet. 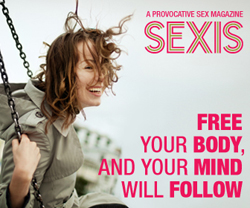 "Action and reaction, ebb and flow, trial and error, change - this is the rhythm of living."

So, the other day, I was sipping on my ... second? fifth? ... I-forgot-how-many-th cup of coffee, when I got this crazy notion to check the SexIs archive and find out how long we’ve been around. I don’t know about you, but I’ve been following this here magazine in my own way since its inception.

I won’t pretend I’ve read – or even remember! – every word written. But those I have read have made me laugh, cry, hope, think and have changed my mind. They’ve taught me things the modern world seems hellbent on only whispering about. And they’ve given me a confidence that once upon a time was only a fading dream in the back of my mind.

When the light bulb sparked, I signed into the backend, flipped to the back page, and got all sorts of excited when I realized that tomorrow, March 6th, 2012, marks the third year this sexy little publication has been doing its thang. We’ve been up. We’ve been down. We’ve been through changes and controversy. But nothing we weren’t expecting or prepared to handle.

As former Editor in Chief Judy Cole said when she introduced herself, sex positivity is a loaded term that everyone defines differently. With our carefully chosen authors and sexuality-based columns, we’ve tried to allow our readership to define what, exactly, that is. And we think you guys have done a fine job.

Hello, readers. Some of you know me. I’m Rayne Millaray, and I’ve done just about everything there is to do in the community of SexIs Magazine’s parent company EdenFantasys. I started as an off-site reviewer way back in August of ‘09. I became an advanced reviewer shortly after, and then started writing for EdenCafe. I began writing the SexFeed at the end of ‘10. And then, in January of ‘11, this grand old company saw fit to hire me to run EdenCafe’s social media. Now, it’s my job to lead you guys through those awesome changes we’ve been mentioning everywhere.

Changes? What kinds of changes?!

Well, here we are, three years in, and SexIs is ready for a facelift, don’t you think? We’ve got some great columnists who are ready, willing and able to get us over that hump of new direction. We’ve moved some of our incredible EdenCafe writers over. The only thing that’s left to do is invite you, dear readers, to come write with us!

You read that right. We’re making SexIs a little more social, a little more open, a little more inclusive (if that’s possible). We want to hear what you’ve got to say about all things sexual, no matter who you are. So, we’ll be opening up submissions to the community and accepting quality contributions from anyone who’s got something to say!

It’s not ready, yet, but we’re getting closer with each passing day. Keep your eyes peeled here and on the EdenFantasys forum! Just as soon as we’re ready to roll, we’ll post guidelines and a posting tutorial to make it easier on you.

So, kick off your shoes, grab a cup of Joe and make a run for a seat by the fire. We’re gettin’ cozy up in here.

Oh, and P.S., while you’re at it, head over to the EdenFantasys site and see if there’s anything there you’re interested in. Drop 3YRSEXIS in the box marked “coupon code” at check out for 25% off your entire order (except items already on sale) from us to you in celebration of our third anniversary. Offer’s good till 11:59pm on Monday, March 19th. You’re welcome! Thank YOU for being such loyal readers. We couldn’t do it without you.
Tags:
Views: 1343