Bombshells, Broadway and Behinds—Fashion Week Comes to an End 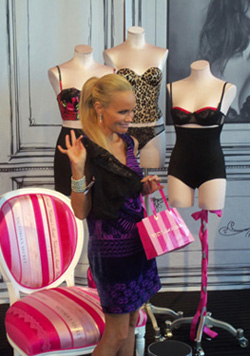 Renee V. Lucas
New York Fashion Week’s big move to Lincoln Center was a huge success. Though some were sad to say goodbye to the former site at Bryant Park, the larger venue, barcode check-in system and lobby lounges made the new location fit in with its uptown, upscale surroundings. Encircled by The Metropolitan Opera House, Avery Fisher Hall, and The Juilliard School, it was good to see some of Broadway’s theater stars step out of character and let fashion take the stage.

Kristin Chenoweth (right), former star of the musical Wicked and the ABC “dramady” Pushing Daisies sat front row at the Nanette Lepore presentation yesterday, along with stage and screen actor Stanley Tucci, who directed Broadway’s Lend Me a Tenor this year. After the show, Chenoweth relaxed in the nearby Victoria’s Secret Bombshell VIP Suite and posed with lace panties and some saucy lingerie. 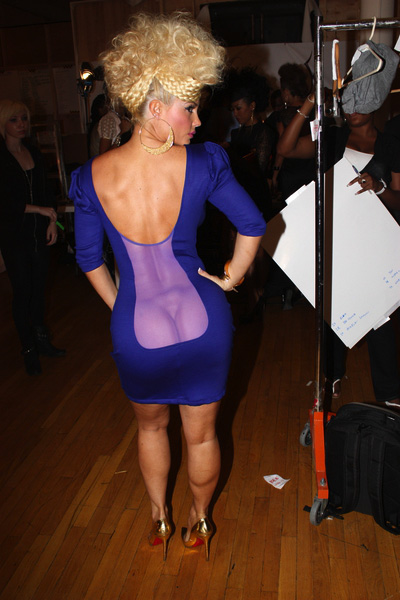 Coco, wife of rapper Ice-T, shows off her famous derrière in this sheer purple dress designed by Sachika. (Photo by Tom Concordia for Runway Resource)

Rapper Ice-T’s wife, Coco, who was seated at Richie Rich’s show last week, was apparently doing some runway research. The busty blonde strutted her bodacious bottom for all to see in the Sachika show, where she wore a purple dress that exposed her famous backside. Coco may also be doing some design research for her denim line Licious made of stretch fabric for curvy women.

On this final day, those who are still in search of next spring’s hottest looks can expect to see an artistic and expressive collection from Spanish designer Davidelphin; red, white and blue Americana from Ralph Lauren; and Gwen Stefani’s super trendy L.A.M.B. line, which will undoubtedly have that rocker edge, which hopefully involved some naughty leather and lace.
Tags:
Views: 952
Related articles