To Wong Fu, and Thanks for Everything Patrick Swayze 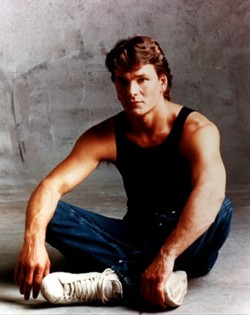 Patrick Swayze took Baby out of the corner and created a sex symbol straight out of the closet.

To Wong Fu, and Thanks for Everything Patrick Swayze

How many first-person narratives start out, “All right, I have a confession to make…”? Too many, perhaps, but here is mine: I’ve lost count of how many times I’ve watched the movie Dirty Dancing.

The film is not highbrow artistic fare by any stretch of the imagination, but as a less than conventionally pretty Jewish girl, when Baby (Jennifer Grey) with a schnozz like Ringo Starr gets the hunky shagets (the male equivalent of shikse) Prince Charming in the end, it resonated with me. The film gave ugly ducklings and odd girls out the hope that: 1) We might turn into swans, and 2) We might get laid by a really hot guy—and in this movie, Patrick Swayze, Lord have mercy on him, was really H-O-T.

Granted, his character, Johnny Castle, had the requisite misunderstood bad-boy appeal, but Swayze was able to amp up the sex quotient with a lithe and muscular dancer’s body that would not quit. Was he a great actor? In a word, no—but he was believable and likeable and lust-after-able, so when Baby, heart-in-hand, says, “Dance with me?” and finally beds him, it’s one of the most passionate—and sweetest—love scenes in mainstream cinema ever. Oh, those hands. Can you say: “Hit the rewind”? Amen, sister!

Swayze’s performance in Ghost as the murdered paramour Demi Moore is not ready to release to the next world gets a lot of hype as a landmark love story, but for me, this film works best on a comedic level—and I’m not just talking about Whoopi Goldberg’s off-the-hook performance as reluctant psychic, Oda Mae Brown. I apologize to diehard fans, but the infamous seduction scene in which Sam and Molly get it on while throwing pottery to the accompaniment of the Righteous Brothers’ “Unchained Melody” leaves me howling with laughter to this day—but maybe that’s because I know something about wedging clay and the slop that is slip. (It’s a ceramics thing, you wouldn’t understand.)

Likewise, Roadhouse strikes me as two-dimensional and cartoonish (although I could watch Sam Elliot sort dirty socks, juggle squirrels or stand on his head and fart the National Anthem and still find him sexy). Maybe it’s all that big bad hair and testosterone-laden bravado.

However, it’s his diva turn as transgendered drag queen Vida Boheme in To Wong Fu, And Thanks for Everything, Julie Newmar that showed a dimension to Swayze’s range that had yet to be explored. The film is not without its share of camp humor, pathos, bathos, violence and high drama—after all, like La Cage aux Folles and The Adventures of Priscilla, Queen of the Desert, it is a film about drag queens—but its deeper message is one of acceptance, coming to terms, and the eventual celebration of individual sexual identity.

Had this been a romantic tale played out along the more conventional lines of a standard drag farce such as Some Like it Hot, in which cross-dressing was merely a comedic plot device derailed at the appropriate moment to reveal the stock hetero Hollywood happy ending, Swayze’s romantic foil would have been cisgender Carol Ann (played by Stockard Channing). But even so, Carol Anne’s being straight and Vida’s transgendered identification do not keep them from falling in love with one another for who, rather than what, they are—at least in a platonic sense. “I do not think of you as a man and I do not think of you as a woman... I think of you as an angel,” Carol Ann tells Vida, who replies, “I think that’s healthy!”

Of course, a storybook denouement is not in the cards for the pair, but the understanding they embrace is ultimately far more satisfying. That Swayze was willing—and able—to risk jettisoning his trademark masculine façade, peeling away the machismo layers like the skin of an onion to reveal the inner soul and heart and temperament of a strong, independent woman—albeit a conflicted one—took incredible courage, and elevated the actor to the status of a sex symbol who could be embraced with a near universal appeal.

He will be missed.
Tags:
Views: 795
Related articles