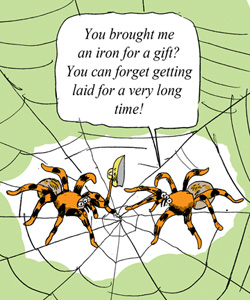 Lady spiders, take note. There are cheapskates out there.
A new study shows that female arachnids have enough spidey sense to be unimpressed with the chintzy offerings male counterparts bring in an attempt to mate.

“Males with gifts increase the chances to be accepted by females and also prolong copulation duration, males without gifts are normally rejected or obtain short copulations,” Danish researcher Maria Jose Albo, who studied the mating habits of the nursery web spider, told LiveScience via email.

Gifts are usually insect prey wrapped in silk but some males will bring decoy gifts like bits of flowers, cotton or an ant husk wrapped in silk to distract the female “while the males have their way.” They will also play dead until the female thinks she can vamoose, “then he wakes up and grabs her for another go.”

Male nursery spiders customarily present a prospective mate with a “nuptial gift,” and “… During the mating the female eats the gift and the male inserts special organs called pedipalp, which transfer the sperm.”

In the study, researchers collected wild spiders and put them in four categories to present to virgin females: without gift, with worthless gift, with flies; and with protein-enriched flies. The males wrap the gifts in silk so the females don’t know what’s inside. Spidey Secret Santa!

The male spiders with no gifts fared the worst at mating; the ones with worthless gifts were disengaged by the females earlier, which gives them less time to transfer sperm.

The study was published Nov. 13 in the journal BMC Evolutionary Biology.
Tags:
Views: 1362