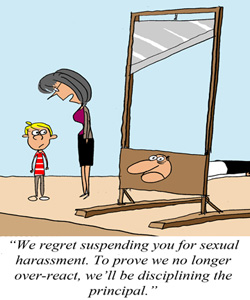 9-year-old boy who made "suggestive" comments to teacher is in the clear, but principal loses job.
You may have read a story earlier this week that ended up getting a 9-year-old boy in Gaston County, N.C., some national attention after he was suspended for sexual harassment. The school sent a certified letter to the boy’s mother, explaining the situation and saying that “Emanyea Lockett said a teacher was fine in a suggestive tone and told a friend she was cute,” WSOC Charlotte reported on Tuesday.

The latest is that the school principal, Jerry Bostic, told the Gaston Gazette he was given “one hour to decide whether to quit or be fired,” WSOC reported on Wednesday. He retired Tuesday night.

“One mistake in 44 years, and I'm not given the benefit of the doubt. I really don't believe I was treated fairly,” Bostic told a TV reporter.

The school apologized to the Lockett family, “saying there was no sexual harassment,” but Chiquita Lockett, Emanyea’s mother, is still considering legal action.

The sexual harassment accusation was certainly over-reactive but doesn’t ousting the principal over it seem over-reactive, too? If two wrongs don’t make a right how to two overreactions make for common sense?
Tags:
Views: 1159