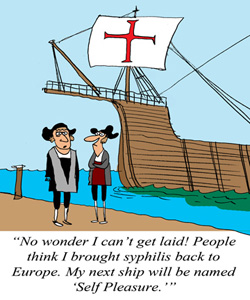 You can blame him for a lot of things, sure, but not that.
So what'dja do for Columbus Day? Dress up like a 15th century explorer and celebrate the discovery of the new world? Nurse your hangover? Or just bitch because the bank was closed? (Oh, wait. That was us.)

Christopher Wanjek of LiveScience took some time to quash some of the myths associated with the holiday-worthy explorer ... including the one that he's responsible for bringing syphilis back to Europe.

We didn't know that Columbus, personally, had been accused, but it was kind of intriguing to hear him exonerated.

It's hotly debated, Wanjek begins, but opens with the fact that syphilis “was present in pre-Columbus America. Yet syphilis likely existed for millennia in Europe, as well, but simply wasn't well understood. The ancient Greeks describe lesions rather similar to that from syphilis.” What “sealed the connection,” he writes, was an outbreak of the STD in Naples in 1494— just after Columbus came home— during a French invasion.

Interestingly, the proof that syphilis was a European disease before Columbus' adventure came in the analysis of the bones from a 13th-century Augustinian friary in an English port city, Kingston upon Hill. “This coastal city saw a continual influx of sailors from distant lands, and you know what sailors can do,” Wanjek writes. Man, we wish he'd said “seamen.”

You'll have to click over to Mother Nature Network to see what else is untrue about Columbus. We're satisfied that he didn't bring the need for a clinic trip back home with his other souvenirs.
Tags:
Views: 993