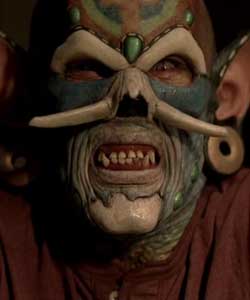 In the dominant Western culture, the roles of transgendered, extremely feminine and homosexual men have been downplayed and marginalized, but in many cultures, those men who did not conform to traditionally masculine archetypes were actually treasured as a magical link to the spirit world.
The fourth season of HBO’s True Blood is roaring to a close with only one episode left to go. Prior to what looks to be a characteristically over-the-top finale, this week we’re going to be taking a look at a theme that has been percolating since last season: The considerable spiritual powers of True Blood’s most prominent queer characters, Lafayette and Jesus. But before we get too into it with True Blood’s least irritating couple, make sure to check out some of our previous articles, investigating how the show uses its hyperreality to explore human relationships, the symbolism in Sookie and Eric’s relationship and more.

We’ll admit to rolling our eyes last season when Lafayette’s beau Jesus was revealed to be a practicing bruja, part of an ancient Mexican tradition of witchery, and went on to explain that his boyfriend also has magical powers of his own. This season, however, the couple’s storyline has offered an interesting counterpoint and parallel to the Marni/Antonia plot-thread, eventually dovetailing nicely into it. While not everyone may be ready to accept Jesus as demon-summoning bruja, or Lafayette as the world’s most haphazard medium, their mystical powers actually have a real-world precedent.

In the dominant Western culture, the roles of transgendered, extremely feminine and homosexual men have been downplayed and marginalized to say the least. In many cultures, however, those men who did not conform to traditionally masculine archetypes were actually treasured as a magical link to the spirit world. With their ability to bridge the gap between male and female, members of what is sometimes called a third sex played important tribal roles as healers, religious figures and more.

Whether holy, sexually ambiguous boys in India, feminine Shamans in the pre-Columbian Americas or even the androgynous Druids of the Celtic peoples, men we would today lump together as “queer,” have long been thought to possess a link to the spiritual world. True Blood continues that tradition with both Jesus and Lafayette.

While it’s unclear whether their powers are actually linked in any way to their sexuality, it’s significant that Jesus’ magical abilities are as central to his identity as his ethnicity, while Lafayette’s are innate, just like his sexual orientation. Also important to note is that while the flamboyant Lafayette is presumably able to channel anyone with his abilities as a medium, the most notable examples of his unique ability have occurred with female spirits.

What do you think about Lafayette and Jesus’ mystical abilities? Do you think they are a conscious nod toward the accepted and often revered roles of queer men in many non-Western cultures, or is it just a happy accident? Also, more importantly, would you be as excited as us to watch a True Blood spin-off of the two solving crimes by channeling the dead and transforming into a demonic avatar?
Tell us what you think in the comments below, and then make sure to watch the season four finale of True Blood Sunday night at 9pm on HBO, and check back here next week for our last look at the season.
Tags:
Views: 1130
Related articles