Can We Stop It with the Strip-Searching Grandmas, Already? 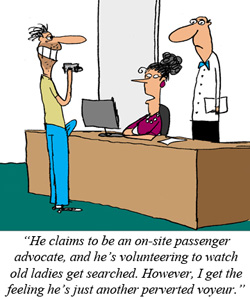 Politicians propose on-site "passenger advocate" for JFK airport.
Well, it’s about time somebody stuck up for little old ladies who don’t want to be strip searched.

We had reports last week of three senior citizens claiming to have undergone humiliating searches by TSA workers in New York’s JFK airport, including one 85-year-old lass whose back brace was removed for a screening because her heart defibrillator made her leery of going through the a scanner. Now U.S. Sen. Charles Schumer and state Sen. Michael Gianaris are calling for an on-site passenger advocate, kind of a liaison between the TSA and the traveling public. The senators introduced the idea in a letter to Homeland Security Director Janet Napolitano and John Pistole, TSA Administrator.

MSNBC quotes Schumer as saying, “While the safety and security of our flights must be a top priority, we need to make sure that flying does not become a fear-inducing, degrading, and potentially humiliating experience.”

The TSA is also setting up a 800 number for passengers with disabilities or health issues to help them prepare for screenings. Refresher courses are planned for JFK employees, the TSA says.

Nothing like plugging the hole in the roof after the storm has passed.

Jokes aside, additional training, an information and the availability of a passenger advocate will hopefully ease what has become the additional travel stress of the screening process.

Now if they can just get a “mute” button for screaming babies, flying could be on its return trip to not being so bad at all.
Tags:
Views: 1118