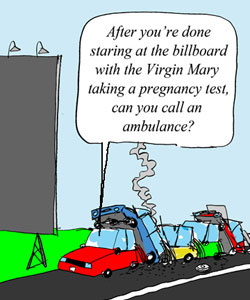 Pretty much a recipe, there, for offending someone. But not us.
Amazingly, a church has introduced something really, really fun having to do with Christmas.

St. Matthew-in-the-City (which sounds like an HBO spoof waiting to happen), an Anglican church in Auckland, New Zealand, has put up a controversial billboard (which you can see in this link to the CBC) that features a classic-looking portrait of the Virgin Mary … holding a pregnancy test and looking aghast at the positive result.

The church’s vicar, Glynn Cardy, told New Zealand’s News Channel 3: “It's trying to make people think about Christmas and to then think compassionately and kindly about people in a similar situation,” … namely young, poor, and pregnant.

That definitely draws attention to social issues, but, the CBC says, the church also courted controversy in 2009 with a billboard of Mary and Joseph looking very uncomfortable in bed with the caption “Poor Joseph. God was a hard act to follow.” They also put up a Gaydar billboard highlighting discrimination against gays in the church.

This billboard has no text. The church is inviting people to make their own captions. Here’s ours: “I married the only carpenter in town who can’t get wood … WTF?!”

Or “Mary, you got some ‘splainin to do!”

Or “Abstinence-only my ass!”