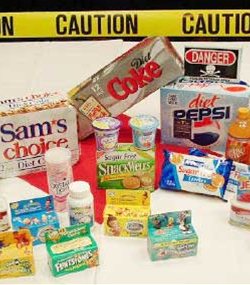 http://worldtruth.tv
ED has a lot of possible causes, and you can spend a fortune on drugs and doctors trying to figure out what they are. Or, you could just stop using artificial sugar substitutes. There’s a libido-killer in your larder, and you need to get it out.
It’s been about ten years since I discovered that I was sensitive to aspartame, the all-purpose, all-occasion, artificial sugar substitute that has spent the past twenty-five years sweet-talking its way into our diets. For two or three weeks, a rash of unexplained aches and pains, tingling hands and feet, headaches, stomach upsets, and feeling that my chest was full of wasps had left me seeking advice from every source -- including several trips to the doctor for tests that would rule out (or confirm) the likes of lupus, MS, or heart disease. Those are not things you want to hear when you’re twenty-one years old, but they're possibilities all the same.

I was still awaiting for the results of the tests when a conversation with a friend turned to diet -- and, more specifically, the fruit juice that I had recently taken to drinking like it was going out of fashion. I had a bottle in my hand at the time, and she took it and read the ingredients. She then asked, “How long have you been drinking this?"

I stopped drinking the fruit juice then. By the weekend, I felt right as rain.

There’s a lot of information to be found on the internet about aspartame; how it converts into formaldehyde and wood alcohol in your system, how it contains formic acid (a pesticide), diketopiperazine (a brain tumor agent), and we all know what formaldehyde is used for, don’t we? You can find how it was linked with cancer in test subjects when it was first developed, and how some ridiculously high number of (in particular) lupus diagnoses can be laid at the door of aspartame consumption. Also, you can read how it is very, very hard to avoid.

It's in diet sodas, “light” snacks, gum, cereal, candy, and pastries. It’s in the flavored pipe tobacco that your dad might prefer; it’s also in the flavored Keurig cups that seem to be such a treat when you find them in the office. It’s even in seltzer water, hiding behind the “natural flavors” tag - because someone, somewhere (presumably the FDA), decided that food manufacturers don’t need to actually specify what those “natural flavors” might contain.

Where things get controversial is in analyzing the truth behind the claims made for and against the stuff. Opponents claim that it is slowly killing us, and having suffered on more than one occasion from the inadvertent consumption of enough to tip a fresh reaction (the seltzer water completely stunned me), I would agree. However, the industry insists that it is perfectly safe, and aspartame’s Wikipedia page goes to some length to dismiss all the health fears.

Also, a lot of people who consider themselves to have no opinion whatsoever will argue that they’ve been drinking diet sodas all their lives and have never had an adverse reaction. Or, if they have, the doctor has provided a reasonable, non-additive shaped reason for it -- like, for example, lupus, weight gain, constant headaches, bad circulation, high blood pressure, or erectile dysfunction.

The science.
When aspartame enters the system, it breaks down, as I said before, into wood alcohol and formaldehyde. Neither of which are products that one would naturally want to find sloshing around their body. For me, it is a cumulative process; in general, I can go a week or so of blithely consuming an aspartame product before I start noticing any ill-effects, and because I am now so familiar with them, I usually (usually - not always) know to start checking the labels of everything in the house until I find the culprit. That bottle of mouthwash in the bathroom, for example.

Once I have found the cause, I’ll have another few days of slowly diminishing discomfort and then it will ramp back until finally, around a week later, I’ll wake up and it’s like a switch has been flicked. I feel back to normal. Of course, it will take only one misguided handful of candy to send it soaring up again, but then it’s my own fault, and I just have to start again.

However, not everybody reacts to aspartame in the same way; or in any apparent way whatsoever. Would you have any inkling whatsoever, for example, if something was very slowly gnawing away at the myelin sheaths that protect your nerves, causing them to start misfiring or getting their signals crossed?

Or, (and we’re talking to the guys here), if something was subtly messing around with your hypothalmus, the first stage of the chain reaction that results in the necessary testosterone production?

Actually, you would... but not at first. I’m going to err on the side of the anecdotal reports I’ve read, and guess that it will take a while for the damage to become severe enough that things actually stop working altogether. And, of course, there are a lot of other causes of ED, from stress to medications, from age to simply no longer fancying the person you’re with. However, the end result of this particular cause is, no more sex hormones. And, because of the damage to the nerves, no more horny messages being flashed to your brain, to get that side of things on the move.

Think of that, next time you walk past the diet sodas at the supermarket.

Is it reversible? I’ll be honest here, and admit I don’t know. I’m assuming it is, for the same reason that laying off the stuff for a few days will allow my body to begin repairing the damage; but, at the same time, I’m not one of those people who can point to half a lifetime of loyal consumption of, say, sugarless gum. Theoretically, if a month of aspartame will leave me needing a week of recovery, then a years worth could take three months. And ten years.... do the math.

What I would suggest, though, is this. If you have any unexplained, or maybe dubiously diagnosed condition, anything that ranges from an occasional ache to the odd fuzzy tingle, on to memory loss and restless leg syndrome, and on through any of the ninety-two signs of aspartame poisoning that the FDA itself has published... and yes, sexual dysfunction is one of them... check the labels in the larder and try eliminating everything that involves aspartame, Nutrasweet, Equal, Spoonful. “Natural Flavors.” “MSG.” And then see how you feel after a few weeks.

It may work, it may not. Let’s face it, though; if the doctor hasn’t been able to fix it by having you take his tablets and medicines, and the naturopath didn’t work with his supplements and herbs, what have got to lose? ...Apart from the chance to continue feeling cruddy, that is?
Tags:
Views: 1847
Related articles