Getting the Snip, Part Two: Complications 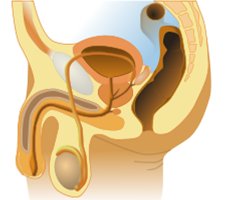 http://commons.wikimedia.org/wiki/File:Male_anatomy_blank.svg
Sometimes you do everything right and things still go wrong. In Getting the Snip, Part One, I told the story of how my boyfriend and I made the decision that vasectomy was right for us. This is what happened when he went for his vasectomy appointment.

We got up early on the day of the appointment. He was nervous. I was nervous on his behalf. He had a shower and when he came back he said , "I think my balls have gotten wind of what's up." He was about as retracted as I've ever seen him, cock and balls both. I tried to relax him with a little kiss and suck and I said goodbye, figuring it could be up to a week before he'd be up for that again.

The leaflet that the doctor's office sent out after the appointment was made emphasized wearing tight fitting underwear, as this is meant to support the testicles after the operation and hold the dressing in place. On top of these, he wore his loosest jeans, not wanting them to rub against his crotch. He finished getting dressed and soon enough, the taxi was here to pick him up. He'd been told not to try and drive himself home.

The office was very nice. The nurse was pleasant as she tried to calm his nerves. The appointment before his was a no-show, so he was shown right in. The doctor explained the procedure to ensure that he understood it was permanent sterilization. It was not easily reversible, and the NHS (National Health Service) does not cover reversal attempts. (The snip itself is covered.) The doctor then went over the procedure itself and explained it was the "no scalpel procedure," with one cut and minimal healing required. She said it would be 15-20 ejaculations to get rid of all the sperm that was left in the system. He liked the sound of that, as we could easily manage that within a week after he was healed.

There was something that had not been mentioned in the leaflet. The doctor asked if he had shaved down there. When he said yes, the doctor said good. Does this mean she would have shaved him if he hadn't done it already? Or maybe just run a clipper along the one spot needed, leaving him with a bald patch? No telling.

So far so good, right?

To proceed, the doctor needed to clearly identify the vas deferens before she started. She had my boyfriend strip off his lower half and get on the table, with a towel draped over himself for privacy. He then had to lay back on the table with his legs slightly apart while the doctor began her examination.

With gloves on, she began examining his testicles by touch. She started with the left side and commented that the vas deferens on that side was swollen. This is usually caused by infection, and indeed, my boyfriend had a prostate infection 18 months ago. When she moved on to try to find the right tube, the examination began to cause pain. At this point, the doctor stopped the examination. She explained that she would have to refer him back to his GP for onward referral to a urology clinic at the hospital. It is likely that he can only be snipped with the traditional two incisions under general anesthesia.

My boyfriend phoned me to give me the bad news, then got in the return taxi feeling thoroughly deflated and low. He had been nervous about the procedure, but very much looking forward to it being done. With waiting times what they are on the NHS, we don't know how long it will take to get a urology appointment.

We went back to the page on the NHS website listing the Fifteen Methods of Contraception to see how we still felt about the other methods. I'm still pretty set against standard hormonal birth control pills, but what about using something that's progesterone only? Would that cause migraines? We should find out. Then we started to wonder, what if the swelling in his vas deferens means he's already infertile? Maybe he should have his fertility tested? Whatever we do, the next step is to see our GP again.

It looks like we won't be throwing out the condoms in the nightstand just yet.
Tags:
Views: 2238
Related articles