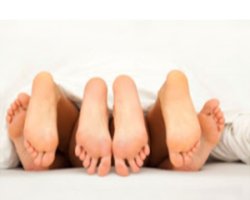 http://www.thejerrycurl.com/2012/01/meet-monogamish.html
Sounds related to monogamous, and it is - but it's not the same thing.
Here's the Urban Dictionary definition: "A relationship that is mostly monogamous but occasionally exceptions are made for sexual play."

Or, as a blog I read regularly puts it: "We occasionally bring guest stars into our bedroom."

So, could we bring "guest stars" into our bedroom? Quite possibly. Without wishing to sound overly sentimental, we consider ourselves to be soul mates. We are, beyond all doubt, each other's primary partners. We have no desire to be in an open marriage in the sense that either of us have sex with someone outside of our relationship. What we are open to is sexual exploration with others together, i.e. we are always both present.

Where it gets more complicated is how, if at all, do you separate the acts from the feelings? For some people, sex and love can be completely separate. Some people do not suffer from insecurity or jealousy. For others, sex is unsatisfying, and sometimes undesirable, without some kind of emotional connection. What if one partner is ok with the concept of casual sex and the other needs at least friendship before getting hot and sticky?