Sexy dysfunctions that can destroy your life: Part One -- Sexsomnia 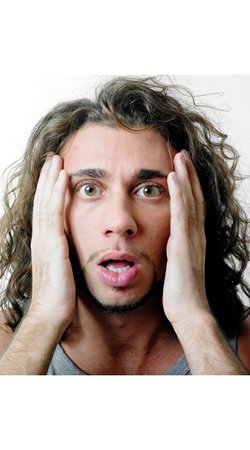 GianluK
Sexual conditions that sound sexy but could destroy your life.

"I was drunk and went to sleep, then I woke up and my life was over. I was standing outside, completely naked, wondering what the hell I was doing there."

Sexsomnia is similar to sleep walking, except instead of just wandering around your house in the middle of the night, you have sex. You could satisfy your significant other while in your sleep! Awesome right?

No. Firstly you don't remember your sexy time. People who suffer from sexsomnia have no recollection of their sexual encounters nor do they get to choose their partners. That's right you can't choose who you have sex with or the condition of the person with which you have sex. There was a report about a woman in Australia that slept walked and engaged in sleep sex with complete strangers.

In a more extreme case, Kenneth Ecott was acquitted of rape charges with the diagnosis of sexsomnia. It happened at a friend's birthday sleep over party. He had been suffering with heavy jet lag, downed a bottle of vodka and passed out on the floor where several other people were sleeping. In the middle of the night he climbed onto a fifteen year old girl and engaged in sexual activity; she woke up screaming. Then he stood slowly, walked out and stood in the garden. When he woke up he could not remember anything he had done.

“I was drunk and went to sleep, then I woke up and my life was over. I was standing outside, completely naked, wondering what the hell I was doing there.” – Kenneth Ecott

Some people might believe that sleep sexing is related to sex drive, sexual perversion or abstinence, but there is no evidence to support that claim. Medical studies show that it can be triggered by stress, sleep deprivation, interruption of sleep patterns, alcohol abuse or drug abuse. People who suffer from sleepwalking, sleep apnea, night terrors or bed wetting are more likely to suffer from sexsomnia.

In medical jargon having sex in your sleep is referred to as NREM Arousal Parasomia -- Sexual Behavior in Sleep. It is a non rapid eye movement (REM sleep) parasomnia. This means it doesn’t occur during your dream state of sleep. It happens during the period of sleep where one is not dreaming at all. Sexsomnia is not exclusive to just sexual intercourse either, it can also involve masturbation, fondling and oral sex as well. It also crosses boundaries of gender preference. Meaning people who suffer from sexsomnia can engage in a lot of different sexual behaviors -- either heterosexual or homosexual -- during sleep, and it is not based on their usual sexual preferences.

Growing up I'd catch my mother sleep walking on a regular basis. She would get out of bed, walk outside barefoot (even in the snow) and smoke a cigarette, in a dazed but determined sort of manner. Then she would slip back in bed and return to sleep. Waking up with sand, soil and mud in the sheets most mornings was normal for her. We were told to just watch her to make sure she didn’t wander too far away and to never wake her up. It was strange to witness, but learning about sexsomnia actually makes me grateful that is all she did was sleep walking.
Tags:
Views: 1611
Related articles