What has EdenFantasys done for me? 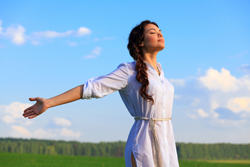 Okay so a little history.... I was the type of kid that knew she liked males AND females from a very young age.  At 5, I ran around my neighbourhood with a condom, explaining to everyone, child or adult, what a condom was for and how to use it.   I was obsessed with sex years before I ever experienced it.   Burying my nose in penthouse forum and literally drooling over the stories as  I read them.
I've made love with boyfriends,  fucked each others brains out and everything in between.   Until my mid-twenties I was a serial monogamist who had a tendency to cheat with her exes 'one  last time.   I was lucky enough to mutually fall deeply in love twice  and when we broke up (due to my substance abuse) my heart was so broken that I did something really stupid- I sought to prove that no one could ever break my heart as badly as I could.

To make a long story a little shorter I ended up standing on a street corner.  I was out there, heavily addicted to drugs, adding to a loss that is beyond words.   It was my own personal hell and I spent those 5 years denying my body any sort of pleasure ( and no I am not a sadist).   The sex trade work itself wasn't all bad, but the degradation and objectification of working in public and having little to no boundaries about what, who and where I was willing to do it tormented my soul. I  hate the phrase "selling your body" , because in truth my body still belongs to me and always did.  What I sold was my pride and my time.  Even worse was the poison that I put in my body that I spent the money I earned on.   It wasn't even fun for half a second and I am thankful everyday that I somehow managed to escape and put my life back together with most of my body and brain still intact.   I am fond of saying that I "had horseshoes up my ass"  because  I was lucky enough to avoid any STDs. I am drug and disease free today. THANK THE UNIVERSE!!!!!

I just got a phone call an hour or so ago that one of my friends from the street died of complications of her HIV/Cancer and addiction.  I am so lucky to be clean and healthy, but that's just my body.

For my first few years of sobriety, I just tried to hibernate to get back the years of sleep I had lost roaming and working the streets.  I was in a committed relationship but my heart hadn't loved anyone - especially itself – in so long. I was hurt and cold and aching and I have to admit, a lousy girlfriend.  I didn't cheat,  but he did stand by me during years of prostitution which is more than I would ever want to ask of anybody regardless of whether I cared about them or not. 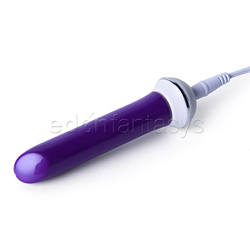 As we both slowly recovered from our addiction, holding on to each other for confidence that we could lead normal lives again,  our relationship changed .   Sex became boring .  I became harder and harder to turn on and he would go numb, lose his confidence and we'd just give up.   So...he bought me a vibrator.  Last year, we decided we had tried hard and long enough and decided it was time to let go.  When we broke up, I was finally free to pursue other avenues of pleasure without guilt.   Instead of jumping into another relationship I  lucked out.   I got a job in a retail sex shop. YAY!!!!

I soon realized that I had come home.  A non-self destructive side of the industry that I craved to be a part of.  I was taught a lot, but the most interesting parts were #1 the products themselves #2 the customers.   I would have loved to stay working there forever but it just wasn't  in the cards.   Due to over-staffing I was put on call and found myself at home with my Fun Factory Ocean and my clit stim gel wanting MORE!!!

My boss had warned me to stay off of the internet, because it is in her opinion (and she's right it mostly is) " biased".   Well I was too curious and now that I had been bitten by the sex toy bug I needed to find out what kind of resources I had if I was going to find my way back in to the industry.   I was thinking maybe I'd have a blog or start a website selling toys- all in hopes ( and this is still my dream) of having my own business providing sexuality workshops, health information, outreach for stw's and a small retail sex toy area.   I even toyed with the idea of a 'feminist' escort agency, which to me means an agency that caters to straight/ bi/ gay/ male/female/trans/poly you name it.

Anyway in my search for resources (and a cheap We-Vibe Tango) I ended up plop!   At EdenFantasys.   Within one hour I was hooked.   I was so excited I started calling up all of my friends and family sharing the good news that I had found my new 'school' and not only does it not cost money but they'll PAY ME!!!!!! I dug in.   Wow! I studied the product pages, so glad for the "real size" feature  so that I wouldn't keep getting toys that didn't fit and impressed that ingredients were finally being listed !!!

The last 4-5 months has been a learning journey.   I have ordered a couple of toys (Gigi and Fifi) that did not suit my fancy,  which was purely my fault for focusing on the pictures and ignoring the warnings in the reviews.   I think this is essential to becoming a future business owner.   I missed not being able to work one on one with individual customers but soon learned that on the forums I could still give helpful advice and even better- could gain a lot of advice as well.

My toy collection has exploded.   Not only do I have the toys I got from assigned reviews and buyout reviews,  but I have traded with several members of the Eden community which I think is a fantastic way to save money and avoid waste.

In fact, the classifieds introduced me to Ryuson, who became my mentor.  The first 19 year old whose opinion I've valued as much as , if not more than, my own since I was 19 myself.  With her help I wrote around 6 or 7 reviews and felt VERY welcome in the community.  Equality is so important to me and I absolutely love that whether you've written  2 reviews or 200, your voice is still just as valued.

I recently realized while writing a eulogy for a loved one that had passed that writing these reviews is helping re-educate me.  When I sat down to write, it became clear to me that without the writing practice I'd had with Eden and the public speaking practice I have had doing video reviews, I wouldn't have been able to articulate  and deliver my feelings surrounding his life and death  as eloquently.

The best part? Eden has ensured me a future with several different possible directions to partake .  Eden has given me a several healthy ways to 'mood alter' and a confidence that will ensure that I'm reaching for non- self destructive pleasure, which will keep my hands " out of the fire".

I have my own site- reviews, info, tales from the trade, erotica, and more but videos are really my thing.

Although I love to write, acting and sex are even more fun (regardless of whether it's sex for one or two or more). Eden has given me a chance to discover that I like to be MYSELF in front of a camera as well and video reviews have become my focus.

I specialize in luxury toys (owning over 300) and vaginal toys with smaller girth plus strap on gear and stim gels.

I am poly and pansexual but more than happy with my cismale partner. We both recently exited the sex trade and never have I had a more compatible open minded WELL ENDOWED lol partner