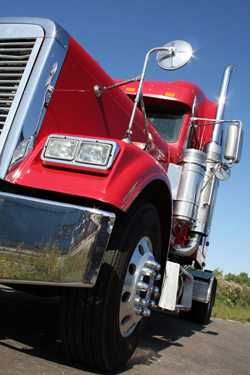 Being the wife of a truck driver is a extremely challenging task. It takes a lot of patience because you are usually the only person that they have to vent to when they have a bad day or there is a troubling situation.
My husband is employed as a long-haul truck driver. He leaves the house at 4:00 am Sunday morning and doesn’t usually get home until Friday morning.

A trucker’s wife is the trucker’s only branch for stress relief. We have to be a sponge and soak up all the overflow that they spill. Listen with open ears and refrain from judging them. When they call and say “I have a bad day,” we have to just hear them out. We shouldn’t compare and say “Well, my day was worse.”

Being gone day and night for five or six days can be very stressful for a driver. In eight days, they will work 70 hours and get 34 (one day and ten hours) off. Our average seven day week is 40 on , 48 (two days) off. When he gets ready to leave and when he’s gone, I have to put aside my feelings and emotions to be strong for him. I have to put on a front, so he will think all is okay, and he won't worry about having to be gone for days at a time.

Since he is the only person in his truck, he gets lonely and bored. On an average day, I hear from him six times. The calls will roll in about once every hour. I get a call in the morning to say hello. One at night to say goodnight. Several through out the day just to say “I love you”. These are all nice and exciting calls.

But there are the calls that make me want to scream. The ones that have all kinds of negative comments and phrases. These are the calls where I get to show just how much I love him. They’re the ones where he needs a calm, relaxing voice on the other end that will listen.

He will call me frustrated because his dispatcher changed his loads, and he has to go somewhere different then he was suppose to go. He gets annoyed because it changes his route and messes with his chances of getting home. My phone rings because a worker at his drop location refused to help him undo safety straps. He will call because someone was rude and treated him like crap because he didn't park the way they thought he should have. A call will come in that an idiotic driver just cut lanes and almost caused a wreck, making my husband need to hit his brakes harder than he should.

“Hello, just calling to say that I'm bored, I just got done driving for the night and am getting ready for bed.”

Truck drivers need to keep their minds clear. They cannot bottle up their feelings because it can cost them their jobs, or their lives, or the lives of others on the road. When listening to them talk, you have to have an open mind and heart, and understand that when they scream and yell, it is not your fault, and they are not yelling at you.

I express my love for my trucker by being the ear he can talk to when he needs one.

We love hearing from you!

Yes, that’s right. We want YOU to write something for SexIs! See this post for details!
Tags:
Views: 1343
Related articles