#ExpressLove - Into the Deep End in Our Open Swim 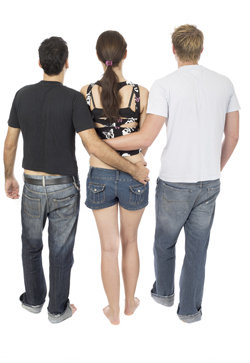 So, how does an open relationship begin? And is it just a case of “Hi, we’re swingers.” and you’re having sex with someone else? Here’s Smokedawg’s story.
It was a little over a year ago that my wife told me I wasn't enough.

It wasn't bad sex, or lack of love between us, or that I was a poor income-contributor to the family treasury. Everything was fine in our marriage (except for the usual ups and down and periodic stressors). I love her and she loves me. We get along great. Also, she’d put a lot of years into training me both as a “good husband” and in terms of awareness of racial issues, and it wasn’t like she wanted to start from scratch with another white guy (nor are there a ton of men of color to choose from in our neck of the woods). (Editors note: For those of you who haven't read Oh, Beautiful You—It Doesn’t Take Much Work, Smokedawg's wife is black.)

Quite simply, between her burgeoning sexuality as she entered the early years of middle age (the mid- and late-30s are the start, folks; stop fooling yourself that that’s “youth,” considering our lifespans are still in the 70s-to-80s range), along with long-held desires to be involved in three- or more-ways … Well, one guy just isn’t enough for that.

Especially with nature’s cruel tricks of making women get hotter and hornier in the 30s or 40s while men’s bodies start getting crankier in terms of reliable erections and frustrating us with longer and longer times between coming and being able to get it up again for second or third rounds.

Despite some initial “Whoa, there!” reactions, I did come to understand what she needed and that it need not be a threat to our relationship. I also realized there could be benefits to me, as well, if we were to open up our marriage to the possibility of swinging and/or polyamorous relationships.

But theory and action are two different things.

Thing is, while I’ve long been attracted to a list of several fetish and kink areas, and my wife’s growing sensuality has increased her willingness to explore new things, we’ve spent more than a year doing nothing much in terms of acting on the desire to have an open relationship.

Part of that is that we’re not impetuous folks, and my wife has a job that puts her in the public eye a bit, as well as having a faith-based spin to it. Also, we didn’t want to do anything in haste that could increase the fractures that had formed in our marriage rather than repair them. Best to be cautious on such a life-altering path.

Granted, we didn’t want to be quite as cautious as we have been. But, like I said, we have some unique challenges in terms of where we live, the options around us and the risks of public exposure.

To our embarrassment and surprise at that event, though ultimately it was fine, we ran into a couple who lives near us early in the evening. We met some other nice folks at the event, and were able to see up close and personal that swingers aren’t a bunch of weirdos (at least no more so than any other people who like sex). We went up to the suites where people could have fun (no nudity or nookie allowed on the dance floor or at the bar area) and watched people playing with each other.

But we were still new to things, and while we had fun, we weren't ready to take the plunge that early.

And then life intervened and prevented us from going to any other events or getting together with people we had gotten to know online who seemed cool enough to have potential for either playing or just to have people we could hang out with who wouldn’t look at us oddly for having non-mainstream desires.

My wife became increasingly frustrated, as well as second-guessing whether she should have even broached the topic of opening our relationship, since it seemed to only be resulting in missed opportunities and deflated expectations.

It frustrated me to no end to see her hurting, confused and unfulfilled. I'd had some of my fantasies met over the years, including my primary area of kink interest, but her various fantasies (including being involved in a three-way with another person—man or woman—which of course was an early sign of her need for an open marriage) hadn’t been met. Granted, my fantasies were easier to achieve, but still, it hurt. Also, I had set some arbitrary rules earlier in our marriage that probably held her back from more fully exploring her sexual needs years earlier. So, I was riddled with guilt that we were in the pool of open relationships, but stuck in the shallow end.

Then spring arrived, and I was able to give my wife a gift.

How ironic that it came as a result of her gift to me.

The very same swinger’s group that had hosted our first event with open-relationship folks the previous year was having a fetish theme night for their monthly gathering, on the night of my birthday, as it happens. My wife paid for us to attend and lined up a babysitter who would stay late and not be freaked out knowing where we were.

We felt out of place at first, as the vibe was a little different compared to our first event. Not bad, just different enough to throw us off since we were still new to the scene, and still virgins to swinging and polyamory as well. But we got into the swing of things (pun partially intended) and we went up to look at what was happening in the rooms upstairs.

And then I did something I’m not usually known for: spontaneous assertiveness. One room was occupied by a couple into some fairly hot and heavy sex, but the other one was home to some more low-level fooling around, and none of the people on the bed. I whispered to my wife that there was no time like the present, and we should take the plunge while there was still a place to do so. It took a few caresses and whispered entreaties, but I coaxed her to the bed, where I licked her to orgasm. I have no idea who watched us, how many people watched us or how intently. The point was that we’d finally done something sexual among other people. Still just the two of us being intimate, but at least on public display while doing so.

We rode that high for a while, and went back to the tamer things downstairs. More drinks, more snacks, some dancing and a few smoke breaks on the deck outside. While outside at one point for a nicotine fix, we struck up conversations with various folks, including a couple a little older than us. They were fun to talk to and very personable, and when the end of the party came, they invited us to their room.

We went with no expectations—after all, we still had to get back home to relieve the babysitter. So, in their room we chatted about this and that, and my wife had some more drinks (I was being a good boy since I had to drive), and when my wife went to use the bathroom, the other man in the room joked, “You’re not stripping over there, are you?”

“Would you like me to?” my wife said teasingly, catching my eye to gauge my reaction. I didn’t flinch.

So she did strip, and as it became clear that our lack of expectations might turn into serendipitous swinger sex, she gave me a look again that said, silently: “Are you OK?”

And so it was that my wife ended up naked on a bed with another man, sucking him and then being entered by him (once she’d sent him off for a condom—he brought back two so I could service his wife, whom I’d been licking out at the time). Once again, as a man other than me lay on top of her thrusting in and out, she looked to me to make sure I was all right with what was happening.

And I was, and I told her so with my eyes, and got back to my own work.

She came a short time thereafter. Our cherries had been busted, and we were officially open instead of theoretically so. In our open swim, we’d finally jumped into the deep end of the pool.

Now, I will be totally honest and note that we didn’t dive or swim with perfect skill. My wife came, but I think her partner might have been hoping for condom-free sex (or maybe he was just having an off night), because he got soft before he could come.

For my part, I was having trouble getting hard at all because I don’t do well when rushed, and my play partner was clearly of a mind that I should just get inside her. I wanted more warm-up, but wasn’t getting it. Also, my wife and I would prefer a multi-way thing rather than a swap, to be honest. I would have been willing to lick her to orgasm instead (one of my best skills) but she wasn’t interested in that.

So, we officially baptized and consummated our open relationship, but only one of us came, and there was no birthday orgasm for me in a swinging situation.

But the person who most needed the breakthrough that night was my wife, and so I’m glad that of all the people there, she was the one who climaxed. Frankly, the gift to me, aside from a fun night in general, was seeing her go home with a glow.

There was still trepidation, too, with her wondering if I would have second thoughts and second-guessing later (I never have), but she clearly felt a deep satisfaction. A weight off her shoulders, and renewed hope for her sexual future and our continued healthy marriage.

My love for her, expressed in her unwrapping of a whole new world of sensuality on my birthday.

Yes, that’s right. We want YOU to write something for SexIs! See this post for details!
Tags:
Views: 1734
Related articles