She Plays, He Plays: We’re Fixated On The FixSation 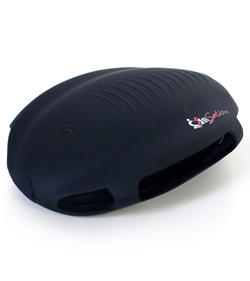 Even if you take nothing else from this recap of our experience with the FixSation Couple’s Vibe, do yourself a huge solid and tend to this one golden nugget of guidance: After you’ve charged the device, but way before you intend to use it (way before), study the enclosed instruction card and properly fasten the vibrating mechanism to the included “panties.”
Whatever you do, don’t wait until you’re in the midst of foreplay to get them ready. There just isn’t much eroticism in stringing the straps through the sides of the FixSation only to find out that you put it on backwards or upside down and that you’ll have to start all over. Trust me. Also, it’s damn near impossible to do it while maintaining some sort of meaningful contact – kissing, pinching, licking, whatever – with your partner.

“The first time we tried, we were giggling so much about the fact that we couldn’t get it right that we had to take a break and come back later,” Susan says. “So we crawled out of bed and figured it out without the pressure of trying to stay turned on. That was much better, and paid off in the end.”

A single button turns it on; cycles it through low, medium, and high modes; and turns it off. That’s it. “Some toys have a bunch of different pulse patterns,” Susan explains, “buzz, buzz, buuuuuuuzzz or buzz, buzz, BUZZ, buzz, buzz, BUZZ. They’re fun to fool around with, but I always end up using one of the constant settings anyway.”

Another minor concern was whether it would truly stay in place. Susan and I are all for intensifying our intercourse, but we’d prefer to keep our hands free while doing it. “The panties don’t seem like much – just the lace waistband and these two garter belt-like straps that run from front to back,” Susan says. “But it didn’t move. We went through a few different positions and I really never had to adjust it. The only time I felt like messing with it was during doggie style when I reached down to push it harder against my clit. I suppose gravity was working against me a little there.” 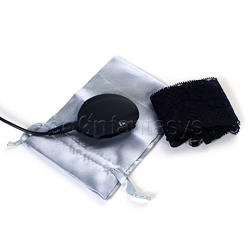 Afterward, I removed the FixSation from the panties and cleaned it with soap and water – you know, being a good, responsible toy owner – and then put it away in the designated nightstand drawer.

Anybody notice what I didn’t do? Exactly. I failed to re-string the panties so it would all be ready for the next time. Which came up a few days later at the end of a date night.

The fondling started on the way home from seeing Wicked, a little heavy petting through the family room and up the stairs, and once we shut the door to our room, it was go time.

“Get that new toy out,” Susan said.

My heart sank – and that’s not the only thing that started to go down. “It’s not strapped together,” I replied.

“Forget the panties then, just grab the vibrating piece.”

So I did. I turned it on and handed it to Susan.

“I figured it fit so good the first time that it was worth a try, and even if I had to hold it in place, I knew it would feel great,” she says.

She didn’t, though. I was on top and Susan situated the FixSation right where she wanted it and then we commenced coital relations.

So now, I always make sure the FixSation is ready to go when we are.

We bet you do, too! So as our thanks for reading us, we’ve got one just for you!

Purchase the Fixsation Couple's Vibe from EdenFantasys, and take 15% off the toy’s price with coupon code SEXISTOYS.

At check out, click on “If you have Coupon, Partner or Gift Card Code” in pink. It’s right there below “Add a Gift Wrap”. Paste SexIsToys in the box that opens under “Enter your Coupon or Partner Code,” click submit and watch the price drop. It’s that easy.
Tags:
Views: 2169