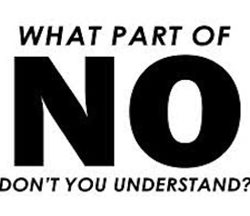 Surveys are no help whatsoever. As the old pre-election caveat goes, you can prove anything with statistics, and a poll in one place that insists that every girl loves it will be instantly disproved by another, somewhere else, where nine out of ten respondents said “bleaugh.” I might even have shown up as one of that number a few years ago, when I was dating a guy whom I had absolutely no interest in blowing, for reasons we will get to later. That’s what I mean about surveys, though; they only apply to the people who are surveyed, and even then, there’s a vat full of variables.

Which (and we touched upon this in part one) might explain why guys can be so pushy about asking for it.

In another article, I referenced a survey that claimed two-thirds of women give head because they feel obligated to do so. You can translate that however you wish. Do they feel pressured? If so, by whom - by society? By him? It doesn’t matter. Do they believe it will make him love them more? Do they think it will make him less likely to stray? Is it a reward for good behavior? Is it a way of getting some sleep? There are a thousand reasons, and all of them are valid. However, what it boils down to is, in a straightforward survey of “do you or don’t you enjoy performing oral sex on your partner,” with “yes” or “no” being the only available responses, two-thirds of women would apparently answer in the negative.

My own aversion, with the guy I mentioned earlier, came down to one thing. We met at a party and wound up in bed, where we talked a lot more than we fooled around, and when we finally had sex (straight intercourse, in a very sleepy missionary position), it was already in the knowledge that we’d be seeing one another again. Which we did, two or three times before we were back in a bedroom, and at that point all things were possible -- even likely.

Until, and it came without warning, completely out of the blue (and just after he’d gone down, rather nicely, on me) he growled, “now suck my cock like the bitch you are.”

Now, I’m not a prude when it comes to bad language, and I’ve reacted well to a lot worse things than that. I’ve probably said them, as well. However, this was so unexpected, and so out of place, that if it hadn’t been the middle of the night, on the other side of town from where I lived, and if he wasn't my only means of transport, I’d have dressed and walked out on the spot.

Instead, I considered all that, and then shook my head. “Sorry,” I said. “I don’t like doing it.”

I tell you this because it illustrates just how easily a woman can be “put off” sex - not just oral, but anything. Everything. Sex is an instinct, the biologists tell us. However, it is also a conditioned response, something that we know we should enjoy to the utmost of our ability, in which we shed all inhibitions and revert to primitive pleasure machine.

There is nothing like setting a bunch of ground rules like that to ensure that we immediately fall short on all counts. Especially once we realize that we’re falling short, at which point one worry piles on top of another, and a third comes running across to join them, and before you know where you are, you have a human pyramid of sexual neuroses dancing around your head. Often without you even being aware of them.

A chance remark is all it takes. I was out with some friends one night, and the conversation turned, as drunken students are wont, to increasingly filthy jokes. The jokes included one that was disgusting enough that I will not repeat it, but it involved a customer vomiting on a prostitute’s vagina. To this joke, my roommate sitting next to me whispered, so only I could hear, “and it’s shit like that which turned me off oral sex.”

I knew exactly what she meant.

Okay, what about those demeaning connotations? Personally, I think anybody who considers a blowjob to be an act of submission has obviously never enjoyed giving one. Forget the fact that you’re the one with his most delicate parts at the mercy of your sharp white teeth. Forget that you not only control his pleasure and pain, you’re also dictating his orgasm. When a cat rolls on its back and displays its fuzzy tummy, it does so as a sign of surrender. When a guy does the same thing... yep. He surrenders, and it doesn’t matter how much masculine grandstanding he had to put on before he got his dick in your mouth, all he’s really saying is “take me, I’m yours.”

Ah, but images can lie (meaning - it’s nowhere near as bad as it looks [insert smiley face!]), and even if they don’t... I’m not going to say “one bad apple,” but I have never met a guy who has tried to do that unbidden, and those that do are probably the same kind of guys who can spoil anything, from Sunday dinner to your dreams of a happy marriage. Some men (and women, too, I know) are pigs, and if you’ve encountered one, I’m sorry. However, don’t let him spoil the rest of your life. He has enough on his plate fucking up his own.

There is no deep-seated psychological reason. There's no fear of getting choked, or concerns about hygiene (which is very real and understandable, but can be solved by making sure your man takes a shower on occasion). No science-based aversion to the biology of the act (“I am not going to suck the thing that he pees through”), no tangible “ah, so that’s why” at all. They just don’t like it. No amount of impassioned “but it’s great fun” flavored articles are going to change that.

So, next time, we’re going to talk about that.
Tags:
Views: 1391
Related articles